The photo shows the most perfect children ever created, reminding Britain’s lower and middle classes that they live in the greatest country in history.

The spokesman added: “Look at them and remember that they deserve everything they have and you don’t because of your inferior genetic material.

“You may now return to your filthy, menial labour.”

Child who wanted pet given fish instead 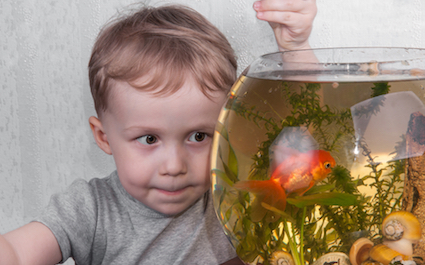 A FOUR-YEAR-OLD who wanted a pet has been bought a goldfish as a stop-gap measure.

Tom Logan had pestered his parents for months before being fobbed off with the fish, which is like a real pet but guaranteed not to last as long.

Father Simon Logan said: “He’s four. I’m not spending the next two years looking after a rabbit he got bored of in the first two weeks.

“This way he gets to see what it’s like to have a pet, sort of, and we don’t have to worry about it escaping or biting or any of that. It’s like a trial period.

“If he stays interested in it for a few months – presuming we’re still with the original fish by that stage, which is unlikely – then we’ll get a rabbit or whatever.

“But chances are about the fourth time we find it floating in the tank he won’t even notice it’s gone, I’ll stick the empty tank in the garage.”

He added: “He’s called it Fishy Fishy Twillywoo. That pretty much proves my point.”