Despite having already forgiven her for not releasing a stolen sex tape on the internet, Cheryl's continued inability to send them naked pictures of herself in an array of demeaning poses could prove the last straw for Britain's 30 million males.

Plumber and man, Tom Logan, said: "I've always loved Cheryl, she looks like a sex doll would if they were actually good, plus she doesn't seem intimidatingly intelligent.

"But her reluctance to fuel my sordid fantasies with even the mildest pornographic images is a repeated kick in the teeth.

"If she doesn't film herself getting in a public toilet with Dane Bowers or a former Gladiator soon I don't think I'll have any choice but to transfer my affections to Hermione from Harry Potter, or that one in the Special K advert that still comes on sometimes."

Teacher and other man, Roy Hobbs, said: "I gave Cheryl one last chance after she didn't indulge in a debauched multi-species four way with a mule, an Irish water spaniel and a starfish while dressed like a stern Danish librarian before sending my mate the pictures and issuing a series of astonishingly feeble excuses.

"However her continued monogamous, conventional behaviour is hurtful and exhausting. In fact I may soon be forced to abandon my dark onanistic obsession with 'La Cole' and start having sex with my wife again."

Coles spokesman said: "Contrary to popular belief, Cheryl does not go like a stoat in a bucket of kittens. The area where her tumpsy would be is in fact featureless and perfectly smooth with a plasticky finish, much like the groin of an Action Man." 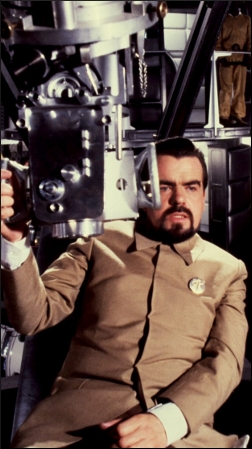 A BRITISH businessman has been named as the prime suspect in the death of a billionaire intent on taking over the world.

Hugo Drax, owner of Drax Industries, was killed last Friday when he was ejected from the airlock of his personal space station 120 miles above Holland.

Detectives in Rotterdam, where the charred remains of Mr Drax's torso fell to Earth, say they want to speak to UK sales manager James St John Smythe, though they stressed this may be an alias.

Police captain Johan DeVelt said: "He is about six feet tall, he has light brown hair and speaks in a refined English accent. He actually looks a bit like Roger Moore.

"We believe he uses false passports and fake identities including 'Mr Fisher', 'James Stock' and 'Dr Mikhail Arkov'. And he also has a Lotus Esprit that can go under water."

The suspect is believed to be the same man who was briefly wanted in connection with the death of a young woman in a Miami hotel who had been covered from head to toe in gold paint. A chubby, red-faced Latvian billionaire and his Japanese henchman were eventually convicted of the crime.

Captain DeVelt added: "We are pretty sure it's the same man, though back then he was a bit taller, had much darker hair and spoke with a Scottish accent. A bit like Sean Connery."

Last night friends of Mr Drax paid tribute insisting he was a kind and decent man whose only flaw was trying to kill everyone on the planet with giant bombs full of deadly bacteria.