1. Oil companies are a bunch of evil pricks.

2. The country is run by arseholes. 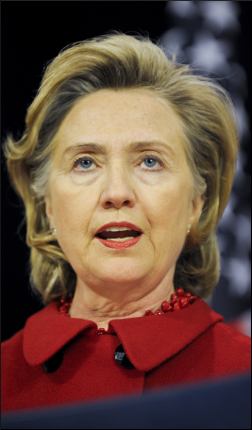 HILLARY Clinton opened a new chapter in the West's diplomatic relations with Iran yesterday by describing the country as 600,000 square miles of sand-infested whackjobs.

Speaking in Qatar, the US Secretary of State stressed that even the country's silhouette looked like a man screaming death threats at a pigeon and claimed Iran was an acronym for 'Is Raring to Attack, Nuclearly'.

In what Middle East analysts say was a coded message to moderate elements within the Supreme Council of Ayatollahs, Mrs Clinton said: "You're a bunch of grade-A fucking maniacs. Pack it in.

"Enriched Uranium and a leader who makes Kim Jong-il look like a tax accountant. Holy Mother of God, I'd rather stick my left tit in the gears of a tank."

Mrs Clinton stressed cultural differences should not be a barrier to progress and that a new generation of modernisers could recalibrate Iranian diplomacy, adding: "One time I was there and there were like all these psychos running around, waving swords above their heads and making a noise that sounded like a car alarm.

"I was totally shitting it, and I said to Bill 'these people are just crazy freaks' and he was all like 'I know, let's Airforce One-it the hell out of here'. Oh, and by the way, they eat live insects, did you know that?"

Iran's elite Revolutionary Guard responded to Clinton's comments by denouncing Western interference and realeasing one of those badly-made videos that looks like an incredibly menacing version of You've Been Framed.

Meanwhile President Obama insisted Mrs Clinton and her State Department officials were 'formulating a new paradigm' to secure stability in Iran and the wider region, adding: "I think we can all now understand why Bill went looking for a bit of uncomplicated chubby on the side. Jesus."