IF Jesus were alive today he would travel from place to place doing IT miracles, it has been claimed.

Theologians confirmed that making Windows work properly is the modern equivalent of healing a leper.

Bible expert Roy Hobbs said: “Things have changed since Biblical times, people are fine for loaves and fishes but they want to be able to watch Game of Thrones without buffering.

“Modern-day Jesus would wander between towns, resurrecting laptops with a single touch and preaching compatibility between operating systems.

“‘Load up thy firewall and browse’ he would say, and suddenly your internet would work without being a perpetual arse.

“Huge crowds would flock around ‘computer Christ’, wielding broken PDAs and laptops. But his attempts to unite rival factions would attract powerful enemies on online forums, and he would die mysteriously at a TED conference.” 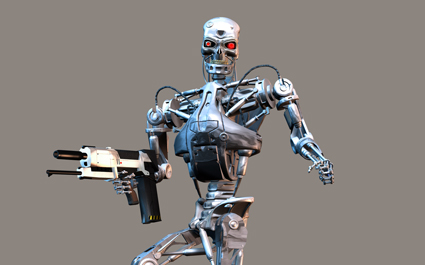 MURDEROUS military death robots are much better than their sensitive counterparts, it has been claimed.

As politicians warn over the consequences of creating robotic killing machines, experts asked them to compare The Terminator with Short Circuit.

Professor Henry Brubaker said: “You could equally compare Robocop, which is brilliant, with the film A.I., which has got Jude Law in it.

“Clearly robots are only interesting when they are making things explode, when they start crying it’s frankly tedious.”