Police To Question Long List Of Starlets Over Jewel Theft

DETECTIVES who questioned Lindsay Lohan over the theft of a £250,000 diamond necklace are to call in Scarlett Johansson and Megan Fox while they're at it.

The Metropolitan Police stressed they could interview anyone they felt like and have drawn up a long, long list that includes Keeley Hawes, Elizabeth Banks, Gemma Atkinson and 'that bird in that music video where they’re all jiggling about doing aerobics'.

A Met spokesman said: "We have to pursue every line of enquiry and sometimes that involves strip-searching dozens of nubile young actresses and asking them if they think we're good-looking."

The jewels were targeted by thieves after it was discovered they had been draped across Lohan's naked breasts during a photoshoot.

Jeweller Emma Bradford said: "The price of diamonds remains fairly static. Anyone who can dig a big enough hole in Africa and has a negotiable stance on human rights can get their hands on some.

"But quality gems that have felt the touch of a sexy redheaded bisexual actress of variable morals will double in value."

Lohan was questioned for 72 hours by the newly-formed Seriously Fit Squad and made to appear in a series of police line-ups dressed as a French maid, a nun and, at the request of Commissioner Sir Paul Stephenson, a Bavarian sheepherder.

Police sources said the raids on London jewellers, previously thought to be the work of a highly-organised crew of criminals on mopeds, may have been carried out by a coalition of Girls Aloud and the Pussycat Dolls, except for the one that looks a bit tranny. 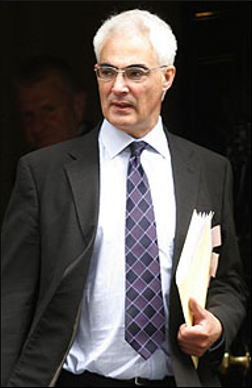 THE near collapse of the UK banking system had nothing to do with the piece-of-shit regulations that govern it, chancellor Alistair Darling will claim today.

In his annual speech at the Mansion House the chancellor will insist that nothing bad will ever happen again as long as everyone makes the right decisions all the time.

Mr Darling will tell Britain's financial bosses: "In future, when the head of the FSA makes a decision I want him to ask himself, 'is this the right decision, or is it the wrong decision?'. I don't see how that can possibly fail."

But experts said the chancellor's comments once again raised the serious question of whether the Labour Party wants us all dead.

Economist Bill McKay said: "The system went into meltdown without any of the regulations being broken at any time whatsoever. Therefore, you might expect the person in charge of the regulations to at least wonder if they're the right ones."

He added: "Alistair Darling is really starting to frighten the shit out of me."

Tom Logan, banking analyst at Donnelly-McPartlin, said: "Put it this way, if the speed limit is 70 then you're going to assume it's okay to drive at 70. And who sets the speed limit? I'll give you a clue – it's not the Royal Bank of Scotland."

He added: "A good example is the credit rating system which gave so-called 'toxic-assets' a triple-A rating when they were, in fact, just a load of manky old shopping bags filled with bottles of piss.

"And it's also quite difficult for the head of the FSA to make the right decisions when the government is telling him to lay off so that everyone can have 18 credit cards and feel good about themselves.

"When, in the name the fuck, is the general election?"