BA chief executive Willie Walsh described the offer as 'a once-in-a-lifetime opportunity' as he unveiled the latest stage in the company's strategy of getting people to work for no money.

He added: "Most holidaymakers have to settle for a fortnight on a sun-kissed beach, never knowing what it's like to part of the glamourous, jet-set aviation industry, where everything is beautiful.

"But few experiences can compare to the thrill of putting tags on luggage while fat sweaty bastards scream at you about things that clearly aren't your fault."

Holidaymakers will also get the chance to carry a clipboard and tell long queues of angry people they are going to be sleeping on the floor for the next two days because no-one has hoovered their plane.

The free offer includes luxury accommodation on a hard plastic chair, while children under five will get to ride around in one of those buggies with the flashing lights, just as soon as they have wiped down the urinals.

Walsh said: "Airports are overlooked as holiday destinations, because people forget just how much there is to do. You can stand around reading car magazines in WH Smiths, browse leather effect wallets in Tie Rack or simply go to the toilet over and over again."

BA's airport holidaymakers will have to pay £10 for breakfast, but they will be able to enjoy it in the comfortable surroundings of O'Hanlon's Irish pub alongside terrifying groups of burly men drinking pints of Stella Artois at 7am.

Martin Bishop, from Stratford, decided to sign his family up for the scheme because he is a big fan of the Tom Hanks movie The Terminal.

He added: "It's been a bit disappointing. The shifts are exhausting and when I asked management if my eldest could have a free go on House of the Dead 2 as a reward for running passport control they called me a shitheel."

Thatcher Tries To Close Her Own Ward 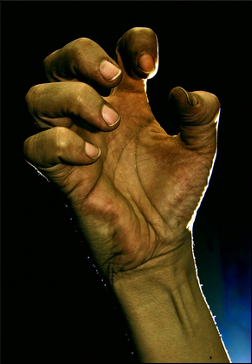 BARONESS Thatcher was under sedation last night after trying to close the ward where she is being treated.

The former prime minister threatened to sack medical staff at the Chelsea and Westminster Hospital after they refused to give her a choice of dressings for her broken claw.

Consultant Denys Finch-Hatton said: "She was initially amused by the karmic forces that brought her under the care of an organisation she fucked sideways with a melon for over a decade.

"But then she became very agitated, got on the phone to Norman Tebbit and told him to sell the hospital to some Chinese gangsters."

He added: "We've made her as comfortable as possible which means, thanks to the enduring effects of her 11 years in power, she's currently propped up outside the gents."

Although Lady Thatcher is in a stable condition, her accident and her advanced age has created a dilemma for the New Labour politicians who have continued her work while simultaneously begging the trade unions for money.

A Downing Street source said: "In the event of her popping off, we'll have to say something that is statesman-like but does not alienate traditional Labour voters. Then again there is only about four of them.

"What about a full state funeral with a 21-gun salute, but at the end we drop her down a disused coal shaft?"

Meanwhile Martin Bishop, a former Liverpool dock worker, said he remained in a permanent state of readiness, adding: "I've got my fireworks, my bunting and two crates of Stella. It's going to be fucking mint."