Prince Andrew's guide to dealing with the media

MY nephew and his partner have got into a spot of bother with the media recently. But don’t worry, kids – here’s how Uncle Andy effortlessly deals with those pests.

The British gutter press has no shame. As poor Meghan is finding out, if one’s past isn’t whiter than white the tabloid press will launch a baseless smear campaign against you using verified photographs of dodgy-looking things you clearly have done.

Have a support network

Useful contacts are imperative. If the tabloid vultures are circling it helps to have an old friend to talk to. Though try to ensure your old friends aren’t themselves embroiled in an international sex trafficking scandal. That can look bad.

Keep out of the spotlight. Live as a recluse, only emerging to do the occasional car-crash interview with Newsnight. You won’t find me talking to Oprah, or signing multi-million dollar deals with Netflix. And that has nothing to do with me being shit-scared to set foot on American soil.

Meghan could do something that would annoy the press slightly less than just existing. I’ve found that having a series unsavoury sexual allegations levelled against you is nowhere near as bad as not fitting in with the royal family. It’s definitely worth a try.

No matter how hurtful what is written in the press is, remember it is only words and don’t sweat it. Not that I can sweat at all, due to a peculiar and unique condition I developed in the Falklands.

How to be a free speech bellend 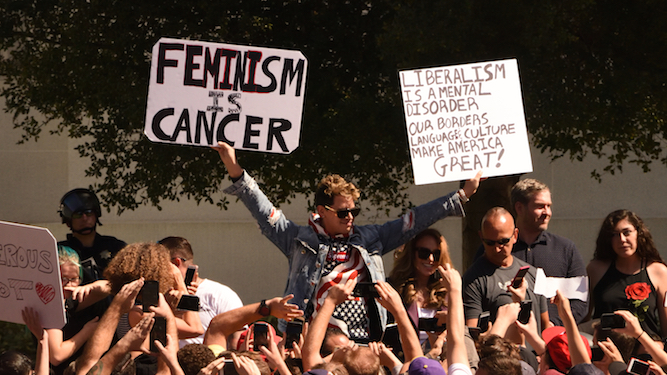 ‘FREE speech’ is the latest buzz-phrase for right-wingers and ranters. Here’s how to bang on about it furiously without understanding it.

Have a very limited definition of it

By ‘free speech’ you really mean ‘me droning on about my predictable right-wing obsessions’, which are ALWAYS transgenderism, ‘woke’, BLM, etc. If aliens landed tomorrow, they would assume ‘free speech’ meant hating feminists.

‘I disapprove of what you say, but I will defend to the death your right to say it’ is what you should be posting furiously with a picture of Voltaire, even though he didn’t actually say it. Worse still, it refers to his right to criticise religion. And the bastard was French.

Talk a lot about ‘free speech’, but in a way that shows you haven’t given it two seconds thought, eg. ‘Brexit is my freedom of speech. So shut up, Remoaners.’

Use it in a trivial context

‘Free speech’ is often used in the context of oppressive regimes that do terrible things to dissidents. If you’re Piers Morgan or one of his supporters, claim a tabloid TV interview with celebrity royals is ‘a hill to die on’, even though no one has been killed or tortured, except perhaps those who watched the whole two hours.

If a few leftie students are trying to no-platform some oddball speaker, it’s clearly only a matter of time before Winston Churchill is completely erased from British history, right?

Don’t even pretend not to be totally partisan. Make it clear that you think the people being censored and persecuted are Laurence Fox, Nigel Farage and Tommy Robinson. Then when someone has the temerity to point out this is bollocks, say it’s an attack on your free speech.