THE one-year-old heir to the British throne has started his first term at Gordonstoun preparatory school.

The public school will be the young Prince’s home for the next decade and will haunt him until the end of his days.

Gordonstoun will teach the young Prince walking and other basic motor skills. From this foundation he will learn to play cricket and rugby while being shielded from the very existence of football.

“The regime of freezing cold showers, grouse genocide and fagging for louche, predatory three-year-olds will soon knock any hint of empathy for other human beings right out of George.

“The Duke and Duchess of Cambridge will obviously miss the personal time they used to spend with the Prince, but they’ll soon fill that half-hour every other Sunday.”

Hunt continued: “Following Gordonstoun he’ll go to Eton, after which it’s hoped he’ll get into Cambridge University but that depends on how well his personal equerry performs in the entrance exams.” 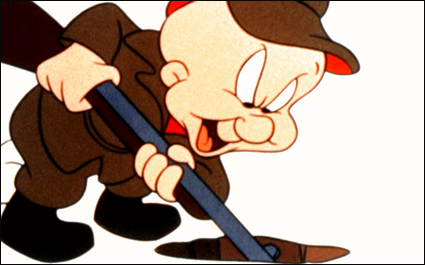 THE government’s chief marksman Elmer Fudd has denied that the badger cull was essentially farcical.

Fudd denied reports that he got his large, bulbous head jammed in a sett while a badger crept round behind him, gave a double ‘thumbs up’ to onlookers then kicked him really hard in the arse.