LINDSAY Lohan has given the green light to hours of furtive self-abuse after resuming her lesbian relationship with sort-of-female DJ Samantha Ronson.

The very-nearly actress reassured fans the couple would once again engage in lesbianic wranglings so greasily filthy it would make them blow off in less than two minutes flat.

The couple split in January after Lohan told Ronson that adding a basic horn section behind a quicker version of an existing song did not make her brother a musical genius.

Friends said the DJ stormed out off their LA home after Lohan suggested that Mark Ronson was 'nothing more than a low-rent Jive Bunny in a stupid hat'.

A separation was organised to establish whether they could sustain two careers based on Ronson playing her iPod at a disco and Lohan staying off drugs long enough to watch her latest film go straight to DVD.

But negotiations were reopened last month after their earnings were revealed to be insufficient to cover their individual gak-fuelled chewing gum budgets.

Accountant Tom Booker said: "These are two exciting young women who are very much in dirty love and just happen to have fantastic new products coming out this summer.

"After some very fraught and emotional discussions we decided it would be best for everyone if we told the world they were nuzzling each other's clamps again." 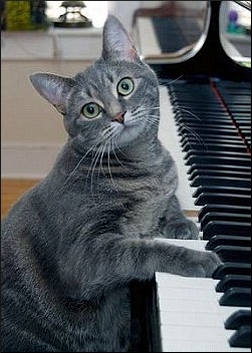 NORA, the cat who shot to fame after a video of her playing the piano was posted on Youtube, checked herself into the Priory Hospital last night.

Friends say she is recuperating at the North London clinic after shaving off her chest fur with a Bic razor and trying to drown herself in a sink.

Owner and manager Sally Winston said: "She's been under enormous pressure since we discovered her amazing talent for leaning on piano keys with her paw and the side of her face.

"Instead of using her litter tray she would smear excrement over the walls and have staring contests with the hoover.

"Then she stole our car, drove it to Las Vegas and married a bugle-playing West Highland terrier that she met on Oprah."

Nora had recently signed to Simon Cowell's management company for £4 million worth of mackerel and long bits of string over three years.

Following her suspected suicide bid, Nora will be cared for by therapists specially trained to deal with animals who become famous as a result of poorly edited internet videos.

Animal behaviourist Dr Julian Cook said: "Famous animals frequently develop psychiatric problems. Well 'Ard from Eastenders claimed to be the reincarnation of 15th century alchemist John Dee and would wander around the set in a tricorn hat, growling in Latin.

"One particularly tragic example is 70s TV bear Gentle Ben who, as his fame evaporated, began to sexually predate on emus and was finally kicked in the face at the West Midland Safari and Leisure park."

Meanwhile Winston has been forced to postpone Nora's 50-date stadium tour to promote her new album Humans, Do You Have Food?