Torture Cops 'Are Just Mavericks Who Don't Play By The Book'

THE policemen accused of torturing drug suspects are loose cannons who may not play by the book but they get results godammit, it was claimed last night.

As six officers were suspended amid claims of waterboarding, police sources stressed that sometimes a cop has to take matters into his own hands if he is going to keep the streets safe for you and that nice little wife of yours.

A Scotland Yard insider said: "They've got some buttoned-up, college-educated divisional commander bustin' their asses. And for what? For givin' some no-good punk a bath when he don't wannit?

"Jeez, times have changed since I joined the force, I tells ya. Times was you could take a perp to the old docks and pop him in the back of the head when no-one was lookin'. Who's gonna be askin' questions about a piece of scum like that?

"We comes out of the academy all fresh-faced, but then you see all these thieves and drug dealers and newspaper sellers on their way home from work day after day, and it changes you."

He added: "Okay, so maybe pushin' someone's head repeatedly into a bucket of water may not elicit the desired response and may, in the long run, prove to be counterproductive in terms of engendering community support and co-operation. Actually, that's a very good point isn't it?

"So what you're saying is that we might have safer communities if we had well-trained officers adhering to strict operational standards, instead of some halfwit maniacs who think they're Dirty Harry or that northern geezer in Funk to Funky.

"Come to think of it, you're right, they really are just a collection of bastards, aren't they?" 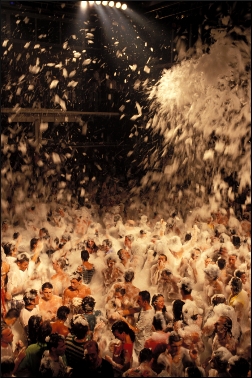 A MUTANT strain of gonorrhoea has laid waste to large sections of Ibiza and is threatening to invade the UK this summer, experts have warned.

The new breed of clap, which has proven resistant to conventional antibiotics, has already razed several nightclubs to the ground and is currently encamped in San Antonio.

The giant gonorrhoea, named 'Crotchzilla' by locals, first appeared after strange glowing lights were seen in the sky over Ibiza Town last month.

Professor Henry Brubaker, of the Institute for Studies, said: "Radioactive germs must have attached themselves to the genitals of a local lothario, or skank.

"It will then have mutated to monstrous proportions in the dank, soggy heat of an Ibiza foam party."

One eye-witness said: "It was a bit like Cloverfield but with more suppurating genital sores."

The Foreign Office said it was now inevitable the monster would reach the UK hidden inside a set of holidaymaker's arsetraps.

A spokesman said: "We are at the mercy of Crotchzilla. All it will take is the combination of a warm, humid summer and our in-built need to fuck anything that moves after two bottles of pear cider."