MEMBERS of the Royal Family have remembered Prince Philip’s only joke fit for public consumption for a BBC tribute programme.

The prank, which involved getting his grandchildren to squirt mustard onto the ceiling, does not appear to have any racial or homophobic undertones and is thought to be unique.

Prince William said: “Getting us to shoot mustard everywhere was his favourite game. And what’s more, it was harmless fun that offended nobody.

“The Queen would hear the laughter, rush in with her hair in rollers terrified he was doing a gag from his Naval days, and guffaw in sheer relief that it was only a condiment dripping from the ceiling.

“Even though the mustard was yellow he didn’t say anything objectionable about it, which demonstrates his admirable restraint. Good clean fun. That’s what gramps was all about.”

Prince Harry, who was not invited to contribute, said: “It might sound more like mindless destruction but spraying mustard everywhere was a staple of music halls back in the day. You don’t get comedy like that anymore.

“Even the servants required to clean the mustard from the Georgian ceilings found it hilarious. ‘Lots funnier than the jokes he makes to us,’ they’d say.” 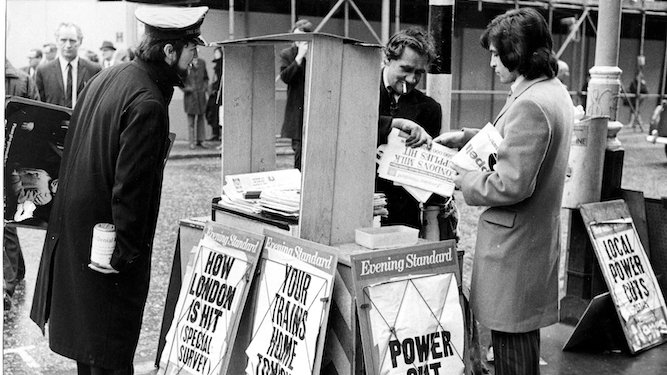 IN 1974, coal shortages forced Britain to move to a three-day working week. As that prospect looms again, Britons remember those times entirely inaccurately:

“It was the harshest winter in decades. I was on strike for a 40 per cent pay increase, which wasn’t much in those days, and the rubbish was piled in towers in the snow-choked streets. Gravediggers were striking so the frozen dead were just left at bus stops. A rat was made mayor. No, wait, I’m thinking of the Winter of Discontent. Shit.”

“I was just a girl but I remember huddling up in blankets and reading by candlelight, burning each page of the book as I finished because we needed the heat. ‘Hurry up’, my dad said as I tore through Jonathan Livingston Seagull. Luckily it was crap.”

“The restrictions meant Arsenal played at 2.15pm on a Tuesday, TV ended at 10.30pm, and Princess Anne married Captain Mark Phillips at 4am to discourage the nation from celebrating. British summertime was extended until December exhausting our reserves, so from January to March we only had two hours of daylight per day. They were such happy times.”

“With only three days to a week you’d go to sleep on Wednesday and wake up on Monday morning. None of the days was a weekend, to increase productivity, and if you weren’t given the same days as your husband you simply didn’t see him. I believe the spare days were sold to Australia.”

“I remember it was all Labour’s fault for giving in to the miners which is why they were on strike. We’d joined the EEC on condition we crippled our world-beating economy and most of Northern Britain had turned to cannibalism. Then Thatcher came in and saved everyone. I wasn’t alive but that’s what happened.”

“It was two f**king months. Literally, start to finish. The last lockdown lasted longer. It happened 47 years ago. Can we not just move the f**k on?”