Without Me You're Nothing, Queen Tells Happy Couple

THE Queen has told newly married grandson Peter Philips to hand over at least 10% of his £500,000 fee from Hello! magazine.

The Monarch said it was only fair that she be allowed to 'wet her beak' in exchange for the international rights to her image.

A Buckingham Palace insider said: "The Queen took Peter and his new wife to one side and told them in terms which can only be described as brutally profane, that the half-mil from Hello! was thanks entirely to her.

"She told Peter he was 'six foot of broken condom' while his new bride was more common than her bog cleaner's bog cleaner.

"She said she had gone to the trouble of dressing up nice and turning out for the cameras and the least they could do was slide 50 grand her way."

Meanwhile Prince Harry has defended his decision to force two dozen cars off the road during a 100mph dash to his favourite London nightclub.

"His Royal Highness had agreed to throttle the first partridge and so he instructed his security team to terrorise a handful of small family cars onto the hard shoulder.

"These sorts of decisions are never taken lightly and we regret that so many people met firey deaths on the M4."

He added: "The party was a great success and the Prince enjoyed himself enormously." 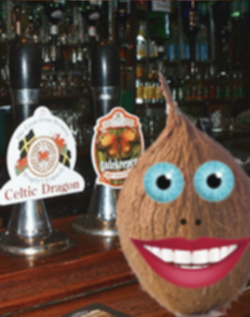 THE family of a murdered coconut last night urged the police to do everything in their power to catch their son's killer.

Jersey police have confirmed that remains found in the basement of a former children’s home are those of Ian Harris, a teenage coconut missing since 1972.

Forensic tests show Harris, 18, died after being hit with a blunt instrument and that his insides were then scooped out, perhaps as part of some bizarre ritual.

Harris's mother Anne said the police should redouble their efforts to find the rest of her son's remains so the family could at least afford him the dignity of a coconut Christian burial.

She said: "Ian was a lovely lad, a little bundle of energy and fun. I can still picture the last time I saw him, heading off to college, his hair all over the place as usual.

"He was a massive Southampton fan and a coconut Venture Scout. He was never happier than when he was out there messing about on his roller skate.

"He was small for his age, but he was very popular. He was always playing the fool. The other mums used to say to me 'your Ian, he's totally bananas'."

Chief superintendent Tom Logan said: "This was a particularly frenzied and brutal attack upon an innocent young man. He was, literally, smashed to pieces.

"While this maniac remains at large, all coconuts must exercise the utmost caution: do not accept lifts from strangers, and if you must go out after dark always travel in pairs."