Your life right now is a buffet of options! There’s stale scotch egg, sandwiches that taste like ground-up dog, and a bowl of crisps tainted by piss fingers. What’s it going to be?

One word sums up how you're feeling today: fucking shit.

Pay attention to your crush's current mood as tiny details indicate where your relationship might be headed. She’s asleep but you are still going at it? Things are looking up!

While everyone around you is struggling along under a cloud of grey, your jovial spirit makes you totally unbearable. Piss off.

The search for the perfect lover may be a long one if your dating goals are unrealistic. Ask him to stop eating his kebab while you’re down there, but don’t get all huffy if he won’t.

Your desire for your sweetheart can't be overstated! Don't tell them how you feel, show them with actions. That’s also a breach of your restraining order? Gee, that’s tough!

Today is a perfect day for enjoying time with your sweetheart. Your husband is playing golf all day and then meeting his secretary for a quickie in the car park.

Be brave and dive into the wonderful world of personals. You might think dating sites are full of needy, desperate dating flunkies and you’d be right. Shags galore!

When was the last time you took yourself on a date? Treat yourself to a night out, or special dinner. Then give yourself a good seeing to, but don’t return any of your phone calls or texts.

You say you are feeling indecisive right now – but are you sure? 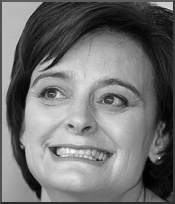 'IF I catch you stuffing food into that pouchy slab of a face once more, I'm going to twat you one' would've been the first words I'd have uttered to John Prescott if I was the counsellor treating him for bulimia – but there again I know how to speak to him, I know it's the only way he’ll listen: you want to know why I know this? It's because as a high-flying QC, best-selling writer and last-but-not least, mother of four children – I've learnt to trust my instincts.

I'm not just Mrs Tony Blair (that's something I want to make abundantly clear) although that's a damned sight more than trillions of women have ever achieved in their lives, but for me that's not enough. I'm my own person, I make my own decisions and I jolly well stand by them, even the one I made to have that cheap plastic surgery done all those years ago. The most difficult decision of all was the one to stand down as First lady – I made it clear at a press conference that it was time to hand over the reigns to someone less qualified to do the job. I must admit I miss the cut and thrust of the daily press briefings, where journalists would regularly quiz me on the stress of being the most powerful woman in Britain (bar the Queen, perhaps).

I had a fascinating meeting with a television production company just the other day. Apparently they want to remake Petrocelli, an American show from the seventies, featuring the adventures of a lawyer. They want me to play the role of Petrocelli – a ballsy, gutsy, sassy yet beautiful in an unconventional way, young female attorney with attitude, and a half-built house. I agreed there and then to sign on the dotted line – on the conditions that they ironed out the continuity problems from the original, which usually involved the house building back story, and that they provide me with a large Winnebago, the best 24-hour on-call make-up artist money can buy, and a hotline to my best friend Laura Bush, who I haven’t spoken to for nearly a year now, for some obscure reason.

Many people look at me and think I must be a hard-nosed bitch to have got where I am, but I’m telling you that couldn’t be further from the truth. I spend much of my valuable spare time (of which there is precious little) doing good works for charity (such as a recent 800 yard sponsored walk for the local Rotary Club) and giving lectures all over the world to poor, humble executives and captains of industry who (sadly for them) are unfortunate enough not to be as gifted, charismatic and inspiring as the likes of you and me – well, me, actually.

I would like to take this opportunity to nip in the bud all these rumours that myself and the Chancellor of the Exchequer, Gordon Brown, don’t get on. The truth is a lot less exciting and melodramatic than that: Gordon is the nicest person who ever lived next door to us in Downing Street, well, save his bodyguard Geoff, and his nanny, Jane – now they were really nice people. Oh, and the man who did his garden and lived in for a couple of months, he was also a better human being than Gordon could ever be, as well. Anyway, we've all moved on now – and given time, perhaps Gordon can, too.