A BIRD is sceptical that a flimsy construction of twigs and mud is suitable to live in, he has admitted.

Robin Tom Logan followed his nest-building instincts to the letter but now wishes he had used bricks and mortar.

Logan said: “There are gaps everywhere and all that’s keeping it up the tree is wedging it between two branches. Who designed this piece of shit?

“I am seriously worried that when I step inside my foot’s going to go through the floor. I don’t think this is a safe environment to raise fledgelings in, not to mention the lack of privacy.

“I’ve been looking at humans’ nests and they’ve got it sorted with their walls, tiled roofs and doors with locks. Glass windows are a brilliant idea too, apart from when you fly into one.

“This grass-and-twigs deathtrap won’t offer much protection if a cat gets up here. And is it so unreasonable to want a modest patio for the summer?

“I’d like to shore the whole thing up with some two-by-four and wood screws, but that’s easier said than done when you’re four inches tall with feathers for hands.” 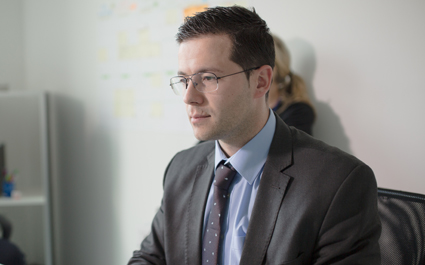 A RECEPTIONIST at a leading City firm has been sent home without pay for refusing to wear a black leather codpiece.

29-year-old Joseph Turner insisted he could still perform his duties while wearing a basic cricket box, but was told that it would not meet the professional standards that clients expect.

“It’s the way you have to stand, hands behind head, hips thrust forward, gyrating your whole groin area while you ask if they’d like tea or coffee.

“The week before I was actually wearing a full gold codpiece with chains and Swarovski crystal detailing but still got a verbal warning because my rolling crotch thrusts weren’t fluid enough.

“I asked my boss if she would wear a codpiece for an eight-hour shift, then the tube home, and she just laughed and said I was being ridiculous.”

A spokesman for Turner’s employer said: “Oh my God, this is so not sexist.

“That is disgusting. If you think this is a sexual thing, that’s come from your mind. That is on you.”