TORY leader David Cameron last night sought to bolster his green credentials by taking his toaster into the street and shooting it at point blank range.

Mr Cameron will today order his shadow cabinet to remove a favourite counter-top appliance from their kitchens and either push it under a bus or take it to the countryside and drown it in a stream.

A Conservative spokesman said Mr Cameron's toaster was the "architect of its own destruction" after ignoring a series of verbal and written warnings since the middle of June.

The spokesman added: "As a society we have some very important decisions to make, not just about toast, but about the smoothing of fruit."

Eyewitnesses said the Tory leader showed no mercy as he terminated his toaster at around 8.20 pm last night.

Neighbour Julian Cook, 51, said: "I heard Mr Cameron's front door being opened and looked out the window, but there was no-one there.

"Next thing I see is the toaster flying through the air and landing in the road.

"Mr Cameron then appears and marches down the path, loading a pair of cartridges into his shotgun.

"He then stands over the toaster, which I think was a Russell Hobbs, and calls it a 'planet killing son-of-a-bitch' before emptying both barrels.

"He then looked up and greeted me with a cheerful 'good evening' before going back inside. I think his commitment to tackling climate change is genuine." 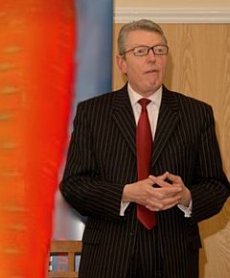 EVERY pregnant woman in Britain is to be given a 16 foot-long carrot, the government has announced.

The women will have to gnaw constantly on the genetically modified vegetable during the last four months of their pregnancy in place of sustained bouts of heavy drinking.

The carrots have been engineered so that all mums – even black ones – will produce healthy, beautiful children with blonde hair, blue eyes and a developed understanding of mechanised warfare, the Government said.

Alan Johnson, the health secretary, said: "Women are stupid at the best of times but when pregnant their hormones make them profoundly moronic.

"If they won't eat their carrots we will strap them to a bed and force feed them cabbage instead."

Pregnant Ruth Edwards, 44, said: "Why not  just sterilise all the poor people who are giving birth to crack addicted criminals and give people who watch BBC2 a couple of large organic carrots instead?"

However, expectant mum Angela Knight, 13, said she thought the free carrot was a fantastic idea as she could sell hers on the black market to raise cash to buy 12 cartons of Craven A and a case of Bailey's Irish Cream.

She added: "Ever since I found out I was up the duff, I have been smoking in the hope of a small baby with a narrow head. I don't want some huge monster bastard rupturing my front bottom."