THE hosepipe bans coming into force will give Britain’s most annoying citizens countless ways to be pedantic bastards and tinpot Hitlers. Here’s how they’ll make the most of it.

Nothing brings out the curtain-twitchers like a government ban. Step into your garden with a glass of water and you’ll feel the glare of jobsworths itching to grass you up if you spill a drop. Check for the glint of binoculars in their bedroom. The joke’s on them though, because water from the inside tap is fair game. You know because you checked the rules. Twice.

Turning it into a competition

Gardens are vicious suburban arenas for passive-aggressive one-upmanship. Your neighbours will mournfully lament that their lawn is much more parched than yours, even though it’s only a couple of feet away. And when the ban’s over they’ll show off their top-of-the-range hose that will leave you brooding about being a failure in life for several days.

Protesting, for some reason

It wouldn’t be a crisis without a rabble of morons making misspelt signs and marching in London. They won’t have a clear agenda, the ‘Covid is a hoax’ twats will turn up, and for some reason the Churchill statue will be dragged into it, with the Daily Telegraph claiming it’s a blow for freedom against woke fascists, or something. Regardless, Piers Corbyn will be there leading the charge.

Not giving a f**k

The half of the population who aren’t pedants simply won’t give a toss. They’ll proudly douse their garden with hose water in the middle of the day for all to see, and somehow their blithe attitude will see them through. It’s only annoying because if you tried to pull a similar stunt you’d be fined instantly. That and the fact there’s now no water at all and you might die.

When the ban is lifted, ‘sceptical’ Brits will be wary to turn the taps back on. After all, they don’t know where this so-called ‘water’ comes from. Or they’ll immediately binge on water despite there being a genuine crisis two days before. Another subset of dunces will set up umbrellas and plastic sheets to protect their lawns against rain, for reasons only known to themselves. 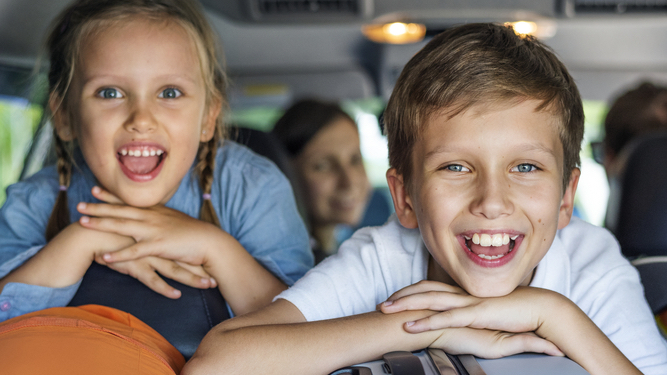 THINK you’re about to embark on a delightful holiday with your lovely family? You aren’t. Here are six ways your kids will f**k it up.

Start fighting in the car

Before you’ve even turned the corner of your street, your children will be antagonising each other, despite being bribed with iPads and sweets to keep quiet. By the time you’ve pulled onto the motorway they’ll be full on punching each other and you’ll be psyching yourself up to give them the bollocking of their lives at the next services. So relaxing.

Disappear at the airport

There’s inevitably a long wait at the airport, which you will spend keeping an obsessive, hawk-like eye on your kids while child-free people do nice things like read books and drink beer. At some stage they will disappear for 20 terrifying minutes before they are eventually found attempting to shoplift LOL Dolls from WHSmiths.

Refuse to eat anything

They point-blank refuse to eat olives and prosciutto at home, but you’re sure they’ll change their minds when dining in a genuine Italian trattoria. They don’t, and loudly demand chips while you are stared at with pitying contempt by a whole roomful of locals who think you are a family of plebs.

Wake you up at 5am

For you, holidays are a time to relax and have a lie-in. Your children, however, spend the duration being either wildly overexcited or desperately bored, and want you to get up criminally early every day to entertain them. You might as well have stayed at home, you think, as it would be exactly the same but way cheaper.

Be grizzly little shits all the way home

The holiday is over and the whole family is even more exhausted than they were when you left. Your kids express their fatigue by grizzling throughout, kicking the back of the aeroplane seat in front of them and having a full on tantrum in arrivals because they want to go back to Spain. Happy holidays!