Man horrified to discover walk 'not to pub'

A MAN who agreed to go on a country walk was shocked to discover it did not involve a pub, he has revealed.

Office worker Tom Logan experienced a growing sense of panic as he realised the Bank Holiday hike was a genuine attempt to enjoy nature and not a flimsy excuse for drinking.

He said: “I thought there’d only be about 10 minutes of this trees and flowers nonsense before we got stuck into the beers.

“But after 14 minutes we were still grimly trudging along a footpath in some valley full of streams and fucking dragonflies.

“I started dropping hints about getting a cold drink, but Jen said there was plenty of water and lemonade in the cool bag with the picnic. That’s when the panic set in.

“I kept frantically scanning the fields and saw a building I was sure was a pub, but as we got closer it was clearly just a cow shed. It’s amazing what fear can do to your mind.”

Logan’s alcohol-free nightmare continued for a further two hours, during which he was forced to feign interest in a tor.

He added: “My advice to anyone roped into some sort of country walk is always confirm you are going to a place that sells beer. Get it in writing if you have to.” 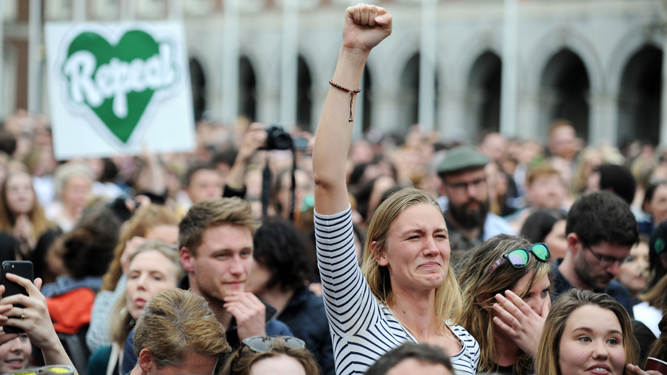 IRISH women have been asked if they could please do something about Trump next.

Professor Henry Brubaker of the Institute for Studies said: “They have achieved the seemingly impossible by convincing their grandparents to make a humane voting choice even though it’s an area that concerns shagging.

“Hopefully they’ve got a ‘to do’ list and the next thing on it is Donald Trump, closely followed by Brexit and wasps.”

Irish woman Mary Fisher said: “We’re actually feeling a bit rough today, as you might have heard it was a big weekend. But we’ll have a look at this Trump thing early next week.

“We’re aware of the problem but I’m sure something can be done. After all there’s only one of him and shitloads of us.”