THE country which exports Bieber has banned an artificially sweetened concoction filled with mood-altering chemicals.

A government spokesman said: Its very sugary, but that hides a much darker side. It contains substances which under our laws are not only illegal but cause nightmares filled with dancing, blood-soaked vampires.

If children are exposed to Irn Bru they go all giddy, but then become hyperactive and unreasonable before forming a vast and terrifying army which if left unchecked will destroy absolutely everything in the world.

Unlike Irn Bru, Bieber is a healthy and delicious substance which is just going through some stuff at the moment.

Irn Bru is an orange-coloured fizzy drink which, experts say, tastes like a mixture of bubble gum and meat.

It is popular in its home country of Scotland where it is used mostly by adults to alleviate the effects of the alcohol needed to live there.

Citizen's arrest 'only works in The Dukes of Hazzard' 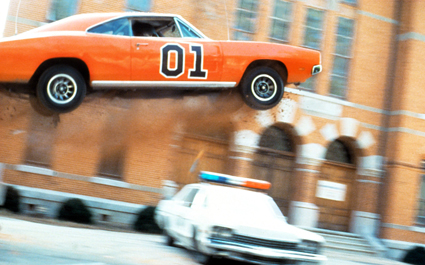 THE ‘citizen’s arrest’ is just a plot device from 80s TV series The Dukes of Hazzard, it has emerged.

Following a Shoreditch hipster’s attempt to arrest Tony Blair, it emerged that this method of apprehending a criminal only works in a backwoods fictional universe.

Legal expert Emma Bradford said: “After driving their Dodge Charger through some barns, Bo and Luke would perform a citizen’s arrest while the local law enforcement agencies drove their patrol car into a swamp.

“But the Dukes were just some made-up men with a fast car who also happened to believe in justice for all – despite their obvious love for the Confederacy.

“If you try doing a citizen’s arrest in real life you’ll get told to fuck off. Unless of course you’re a black guy trying to do one in Hazzard County.”