FOREIGN bomb doctors have brought "disgrace" on their profession by breaching rules on out of hours work, according to the British Medical Association.

The new GP contracts restrict the perpetration of terrorist outrages to normal surgery hours, nine until five, Monday to Friday.

Senior medics say the bomb doctors should be struck off for attacking Glasgow airport on a weekend afternoon when they should have been playing golf, or drinking heavily.

Dr Bill McKay, head of the BMA's GP contracts committee, said: "This undermines our negotiating position with the Department of Health."

He added: "Doctors spend many years studying before taking a solemn oath to earn £100,000 a year and play at least 18 holes every Saturday. We do not work at weekends.

"Not only were they not playing golf, they attempted to drive a shabby L-reg Jeep into an airport. Any proper doctor would have used a Range Rover or, at the very least, a BMW X5."

NHS vetting procedures are to be upgraded to cope with the recent influx of foreign bomb doctors.

Currently all new medics arriving from abroad are requested not to murder large numbers of British citizens.

From next April they will be told that mass terrorism is "unprofessional" and will be asked to sign a disclaimer. 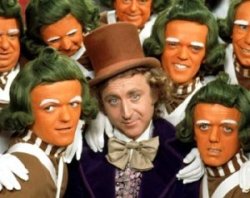 WILLY WONKA has been fined £75,000 after rats were discovered inside his magical chocolate factory.

In court Wonka had claimed the rats were highly-skilled employees who were able to retrieve lost children from ventilation system.

His lawyers then insisted the rats were actually the pets of the Oompa Loompas, Wonka's army of cheap foreign labour.

But Justice Finch-Hatton ruled that the Wonka factory was "seriously deficient in terms of health and safety" and that Wonka "occupied a strange fantasy world, seemingly oblivious to the regulations governing the manufacture of confectionery".

It's the latest setback for the multi-national chocolate empire. Wonka is fighting four separate legal actions after a factory visit last year by a group of prize-winning children ended in serious injury and illness.

Augustus Gloop, a nine year-old German boy, contracted a rare form of food poisoning and is now paralysed down his left hand side, while British schoolgirl Veruca Salt was beaten unconscious by angry squirrels.

Wonka said he was considering an appeal adding: "The rats are my friends. How could I ask them to leave? They have kindness in their hearts.

"Unfortunately they also carry botulism in their lower intestines."