Cats indifferent to your fate

REPORTS that a cat-borne parasite can seriously harm humans have been greeted with indifference by cats.

Toxoplasma infects thousands of homo sapiens each month and can cause cysts in the human brain. However cats do not see the issue as a priority.

Overweight grey cat Roy Hobbs said: “Thanks for the heads up, but these balls aren’t going to lick themselves.”

Black and white three-year-old cat Nikki Hollis said: “The main action I’ll be taking is going back to sleep.”

Professor Henry Brubaker of the Institute For Studies said: When we all start dropping like flies from the smorgasbord of cat diseases, they will briefly wonder why everything is so quiet before carrying on doing fuck all for 23 hours a day.

That lovable family pet of yours is a stealthy toxoplasmosis bullet and you may as well give scraps of chicken to a screaming lunatic wearing a Semtex waistcoat.

“Dont assume your mouldering corpse will be viewed as anything other than a minor obstruction between cat and catflap.”

The elderly-friendly harbingers of death have established an effective relationship with humans based on lonely people choosing to misinterpret their demands for food as some sort of affection.

Brubaker said: Sensible people always thought that cats are nasty little bastards that enjoy messing with us but its actually worse than that  they barely know we exist. 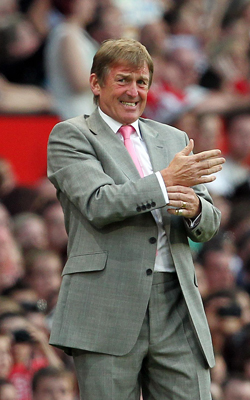 KENNY Dalglish has signed for Liverpool, boosting both morale and their ineffective strike force.

A proven goalscorer at both club and international level, Dalglish is considered the ideal candidate to bring back the heart, the passion, the pride, the passion and the heart to the football club.

Diehard fans are convinced the signing will bring back Liverpool’s glory days. Besides footballing victories, they believe it will trigger the recommissioning of Brookside, Bread, the reformation of The Farm and Jimmy Tarbuck’s return to Saturday night TV.

Some commentators have queried the £42 million Liverpool paid for Dalglish, particularly as he is not affiliated to any club, and the length of his ten year contract.

Roy Hobbs, editor of the Liverpool fanzine Shirt!, said: “When it comes to Dalglish, money is no issue. It’s about the pride, the heart, the passion.

“And the heart and the pride. And the passion. And heart.

Liverpool remain among the biggest names in British club football, with three syllables and nine letters.

And whereas fans of other football clubs make their way to the ground one by one, never communicating or consorting with one another, Liverpool fans, uniquely, never walk alone.

Footballologist Stephen Malley said: “You can’t go wrong with a man like Kenny.

“I’d put myself up for the team but I’m a wee bit young at 38. You don’t win anything with kids.”