Corsodyl advert shows woman being murdered by her own teeth

THE makers of Corsodyl mouthwash have defended a new advert in which a woman’s teeth come to life and murder her.

The TV advert has been criticised for depicting a woman’s teeth becoming sentient, escaping from her mouth and killing her because she does not use mouthwash.

A GlaxoSmithKline spokesman said: “Evil teeth plotting to kill you horrifically is simply a way of highlighting the problem of gum disease.

“We’re not trying to scare anyone, just present a hypothetical situation in which teeth work themselves out of your jaw during the night and try to slit your throat with a carving knife.

“Or put shards of glass in your breakfast cereal, leave a rusty bear trap in the shower and rig up an elaborate contraption to decapitate you with an angle grinder.

“As far as we know there are no actual cases of people being murdered by their teeth, but you can’t be too careful when it comes to oral hygiene.”

Office worker Nikki Hollis said: “The bit where the teeth are chanting ‘Die! Die! Die!’ in their high-pitched demonic voices certainly reminded me to buy some mouthwash.

“No one wants their teeth to fall out, but you definitely don’t want your severed head bouncing down the stairs in slow motion.” 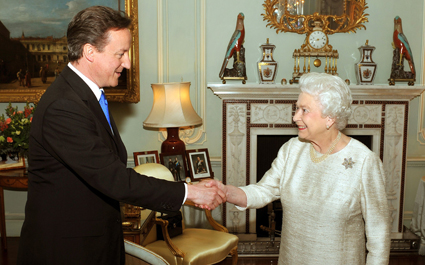 THE presidents of Nigeria and Afghanistan have been overheard discussing how the British government is ‘fantastically corrupt’.

During a conversation at a Buckingham Palace drinks reception Muhammadu Buhari, the president of Nigeria, said: “He likes to have sex with dead animals and his father had a tax haven in Panama.

“Just imagine the shit he’ll let us get away with if we play ball.”

Ashraf Ghani, the president of Afghanistan said: “I’ve heard this Queen collects diamonds and gold whilst the people of the country are people using food banks.

“She sits on a throne with a crown on her head and has the balls to tell poor people to tighten their belts!

“They even found a way of taxing people for having empty space in their houses.

“So, we’d best be careful dealing with these lot. They sound like right slippery bastards.”