Kids to attend school in Zorbs

CHILDREN are to attend school in airtight inflatable plastic spheres for the near future, the government has confirmed.

Zorbs, usually reserved for outdoor adrenaline activities, will be redeployed within schools to protect children from infection while allowing them to continue learning in style.

Education secretary Gavin Williamson said: “It is crucial for these children’s futures, and to stop their parents getting f**ked off at us, that they remain in full-time education.

“So, rather than a rigorous testing regime because we’ve unexpectedly run out, we will be suiting up every child aged between four and 16 into a sturdy, fun and life-enhancing Zorb.

“They can roll out of maths lessons into geography lessons without ever coming into contact with Omicron-tainted air, because they’ve got all the air they need for the day inside their bubble. I think that’s right. I’ve not checked.

“Teachers? No Zorbs. But under this system teachers can still come in even when suffering with Covid, and if they don’t they’ll be fired. If they’re not happy with that they should have made less left-wing life decisions.”

The subsequent discovery that there are only 68 spare Zorbs in the UK with no plans to import more has been ignored by Williamson, who replied he is focused on getting things done.

Rumbelows and other shops it's hard to believe existed 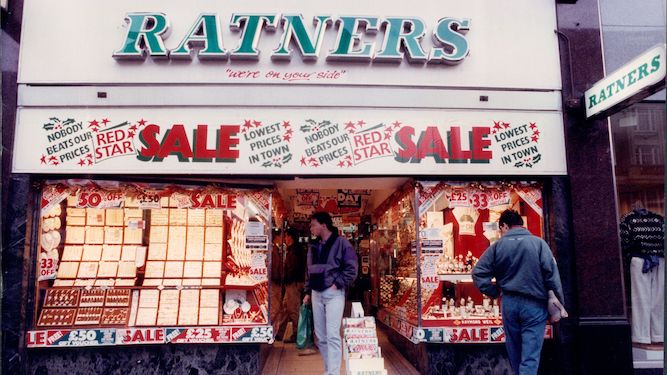 ONCE rulers of the high street, it’s now impossible to believe that their unsettling concepts were ever viable businesses. How did they ever survive?

To listen to a song – a single, three-minute song – you heard it on the radio, noted the name, got a bus, and asked the assistant if they had the single. Frequently they didn’t. Today’s teenagers are annoyed if a song they click on buffers for 3.5 seconds.

TVs used to cost six months’ salary so you rented one. And washing machines and stereos, but mainly the telly. Some sets were coin-operated and many old bastards still have stories about running out of 50ps just before the last minute goal in whatever old bastard event.

Cheap gold is a contradiction in terms, and for Ratners also a business plan. Destroyed when boss Gerald Ratner admitted its wares were ‘total crap’, the name still survives today as a term of contempt for nasty shiny jewellery worn by wankers. Something to be proud of, Gerald.

At the dog-end of the summer holidays, you’d be dragged to Woolies for new school uniform and pencil case, then hang around for an hour while your parents browsed garden tools. 30p to spend on pick ‘n’ mix was no compensation for the cool girl from your school on the record counter sneering at you.

Fancy a night in with a takeaway and a film? The film was the tough bit. Traipsing up and down the aisles picking your VHS, discovering you had a fine to pay from last time, and not getting stroppy because you’d rented The Lovers’ Guide two weeks before and nobody could ever find out.