LISTENING to any record by Sting while drinking wine will make even the finest vintage taste like rancid tramp's urine, research reveals.

Study author Professor Henry Brubaker said the taste varied according to the song, with Roxanne leaving behind the delicate flavour of a young runaway after two nights in a cardboard box next to the Royal Festival Hall.

However, listening to Sting's recent album of lute tunes Songs from the Labyrinth made a Petrus '61 taste like the distilled micturation of a homeless Glaswegian alcoholic who had been marinated for ten years in his own vomit.

Professor Brubaker said: "In laboratory tests we gave one subject a Chateau Margaux '78 and then put on The Dream of the Blue Turtles. He was sick on my shoes.

"We then gave another subject a nice glass of zingy Cloudy Bay sauvignon blanc, started playing De Do Do Do, De Da Da Da and by the chorus she had pulled out her own tongue and ripped her ears off.

"We were going to repeat the experiment using Chris de Burgh's Lady in Red but my ethics committee intervened. I don’t want to go to jail for manslaughter."

The professor added: "At first we thought the cause might be some previously undiscovered link between the fungiform papillae taste buds and the Eustachian tube of the ear. But then someone pointed out that Sting's music is just a lot of pish." 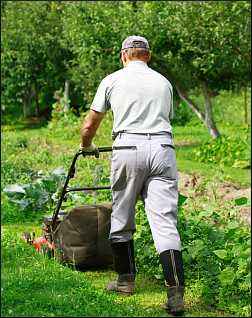 A MIDDLE-aged man has admitted he was surprised to be nominated for the biggest prize in art, stressing he really was just mowing his lawn.

Roy Hobbs, an assistant bank manager from Gloucester, said he was taking advantage of the good weather to cut the grass, put in some new bedding plants and do a bit of weeding.

He added: “So it came as something of a surprise when a couple of days later a chap appeared on the doorstep saying he was from the Turner Prize committee and that I had been shortlisted.

“It turns out I encapsulate not only the cultural clash between Islam and the West, but I’m also an iconic representation of the inherent contradictions of globalisation.

“I said to him, ‘that’s very nice of you, but I really was just cutting the grass’.

“He kept telling me I was ‘terribly daring’, and I said I didn’t think so because I had checked the forecast and if there had been even a hint of rain I’d have been straight back inside with a cup of tea and an episode of Midsommer Murders.”

Mr Hobbs will face stiff competition this year from a teapot on a plinth, a very long radiator, a Felix the Cat video and a mannequin on the toilet.

He added: “My wife and I are very much looking forward to the trip up to London. She thinks the teapot is a shoo-in, but I have to say, I just love the mannequin having a shit.”