Personal Superbugs For All, Pledges Johnson

EVERY NHS patient will be allocated a hospital acquired infection with their name on it, under government plans for a personal health service.

Patients will be infected with their own flesh-eating superbug on arrival by their own dirty nurse, cutting the time taken to reduce them to bare skeletons from the current six weeks to a matter of days, the Government said.

Every NHS 'customer' will also get an annual statement telling them exactly how much of their tax had gone towards their GP's boat. Meanwhile all those waiting more than two months for essential surgery will be given someone to wait with them and help them with sudoku puzzles.

He said: "I am working class, I virtually brought myself up and I can remember having to go out and mug old ladies to find the money to buy aspirin for my brothers and sisters. And now look at me standing up here in front of you lot. Haven't I done well?"

Mr Johnson said existing superbugs such as MRSA, clostridium difficile and necrotising fasciitis will be renamed 'Ivar', 'Billy' and 'Poang' to make them easier to remember for dying pensioners, whose brains were half eaten away.

He said: "What kind of society allows its old people to be turned into mouldering clumps of green pus by a jumble of initials or unpronounceable Latin?

"We want our pensioners to be consumed by their own insides by one or two syllable diseases which leave their dignity intact.

Returning Soldiers To Get A Free Turnip 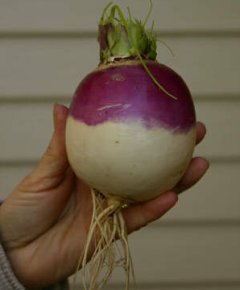 BRITISH troops returning from combat in Iraq and Afghanistan are to receive a free turnip, the government has announced.

The move comes after mounting pressure from servicemen and their families, determined to receive some kind of large vegetable in recognition of their sacrifice.

"So I am delighted to announce that the next time I meet soldiers getting off the plane from Kabul, I will be able to hold out my hand and say,'well done, here's a turnip'."

Mr Browne said the large root vegetable was both a tangible recognition of their bravery and could make an interesting soup which would feed a family of Geordies or Scots for up to a day.

He stressed that offering an exemption from council tax or a large cash bonus would send out the 'wrong message'.

Mr Browne added: "When you've spent six months desperately trying to avoid being killed by psychopaths in a war that has lost all meaning, £140 off your council tax could be seen as an insult.

"A turnip, on the other hand, is an enduring symbol of a nation's gratitude. You could keep it in a box and show it to your grandchildren.

"And who knows, perhaps that turnip will inspire a new generation of heroes."