EXPERTS have warned the dense fog over greater London will be used as a metaphor.

As the capital was enveloped in a thick miasma that seemed to symbolise Britain’s economic and cultural malaise, scientists said that was exactly the sort of shit you need to watch out for.

Professor Henry Brubaker, of the Institute for Studies, said: “I suspect Janet Daley is already 500 words into something amazing.

“It’ll start off being about how lots of planes are grounded at Heathrow , but – unless you’re some kind of gibbon – you’ll realise very quickly that the ‘planes’ are Britain and the ‘fog’ is the Eurozone.

“She’ll say the only way Britain can ‘take off’ – fantastic – is to clear the fog with a referendum.

“And then the Daily Telegraph will pay her more than you earn in a fortnight.”

At the Guardian, technicians are assembling a nine foot high, revolving metaphor which stars George Osborne as a Victorian ne’er-do-well robbing the innocent public sector while undercover of a thick fog which is both the financial crisis and the inevitable consequence of Britain’s post-industrial decline.

And the Daily Mail has warned that millions of immgrants have already
used the fog to steal your job, stressing this is not a metaphor and
that you will definitely arrive at work this morning to find a sneaky
Bulgarian drinking out of your mug and chatting to your former
colleagues about Christmas television adverts.

Brubaker added: “Newspapers are a dense fog full of people who want to urinate in your face.”

Meanwhile, a poll has found that seventy-two percent of Britons believe the fog is millions of escaping ghosts. 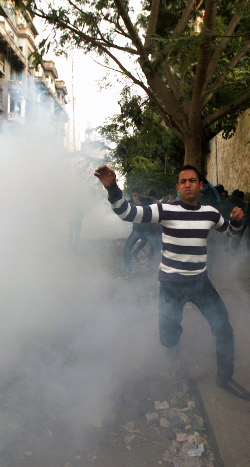 THE ‘Arab Spring’ is a mistranslation, it has emerged.

As soldiers cleared Cairo’s Tahrir Square, Arabic translators in Europe and America admitted they may have created the wrong impression.

Experts have now confirmed that the term ‘ar-Rabi al-‘Arabi’ means both ‘Arab Spring’ and ‘the firing of tear gas at Arabs’.

Stephen Malley, a grade five UN translator, said: “When I saw the weekend footage from Egypt I checked my notes. Sure enough, the Arabic word for ‘democracy’ does look very similar to their word for ‘indiscriminate gunfire’.

“Everyone was talking very quickly and one of my squiggly bits wound up in the wrong place.”

Egyptian president Omar Suleiman, who changed his first name to ‘General’ the moment he took over from the deposed Hosni Mubarak, said: “I’m as confused as anyone.

“For months I have been under the impression that the great Egyptian people wanted me to turn the riot police on them. I have duly obliged but now they tell me it actually has something to do with apple blossom and young lambs.

“Perhaps I’m supposed to set fire to the apple trees and tear gas the lambs.”

Malley added: “By the way, the Arabic word for ‘free and fair elections’ sounds really like both ‘iron fist’ and ‘cattle prod’.