TEENAGE binge drinkers are having a great time getting totally wrecked with their mates and generally having a huge laugh, a new study has found.

The underage boozers were found to have a 60 per cent higher risk of giggling uncontrollably at something really daft while sitting in a park with a bottle of Cinzano Bianco.

The chances of being invited to a house party in a posh suburb, raiding the drinks cabinet, getting some snogs, dancing wildly to really repetitive music, and then doing a poo in the middle of the front room before leaving were all vastly increased.

Dr Wayne Hayes, head of teenage studies at Dundee University, said the research was incontrovertible proof that modern teenagers were drinking loads, going out all the time having fun, and getting tons of sex. “The bastards,” he added.

“I am sure they are storing up the problems for the future. They better be, otherwise I wasted all my teenage years cramming for my exams when I could have been out getting pissed and shagging,” he said.

Bobby Timms, 15, of Belshill, Lanarkshire, said he had never had so much fun in his life until he discovered the delights of Mad Dog 20/20 mixed with some additive rich Sunny Delight to encourage “a nice bit of the old hyper-activity” with his girlfriend.

However, he denied that modern teenage life was a constant whirl of drink, partying and sex. “It’s much, much better than that, granddad,” he said.

Meanwhile, Tory leader David Cameron has promised to take every 16 year-old in Britain to the pub and buy them a pint to encourage them to act more like adults.

He said: “We want our teenagers to feel they are an integral part of British society. They can’t really do that unless they are disinterested and half-pissed most of the time like the rest of us.” 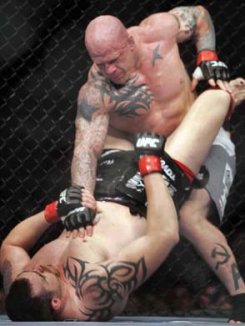 NO holds barred cage fighting can lead to long term gayness and an obsession with thighs, the British Medical Association claimed last night.

The BMA is warning that men who are attracted to cage fighting are already gay or at least entertaining the possibility of a gay-based lifestyle.

According to a BMA study around 82% of men who took part in the vicious fights were gay before they started and another 12% became gay during their first fight.

The remaining 6% took part in cage fighting because they wanted to beat up gay men.

Cage fighting began in the United States in the 1980s as a way for off-duty policemen to act out their fantasies.

Fighters are only allowed into the cage if they are wearing tight-fitting underpants and are covered in olive oil. They are then allowed to grab any part of their opponent's body before throwing him to the floor, jumping on top of him and asking him out for a drink.

Roy Hobbs, a former Ultimate Fighting Champion, denied he was gay, insisting he preferred to socialise with men because they had bigger hands.

A BMA spokesman said: "Gayness is a lovely thing, but we think there are better ways to discover your sexuality than stripping down to your undies, getting oiled up and pummeling another man's thighs. That said, we haven't actually worked out what it is yet."