CRUSHING anti-psychotic drugs into some yogurt has replaced television as the world's most popular method of child care, new research shows.

Almost 70% of mothers said heavy sedation was the best way of neutralising their children while they talked to their friends over a glass of white wine.

Meanwhile 88% of fathers said they liked to give their kids a double dose so they would sit still during Top Gear.

Emma Hollis, 36, said: "When we were first married we liked to eat out a lot, but then, for some unknown reason, I let Tom get me pregnant.

"Then the nightmare began. They would just run around all the time, shouting, laughing and behaving in the most ghastly, childish way. Until we discovered the joy of extra-strength pharmaceuticals.

"Now they're so peaceful Tom is able to flick an olive into Jack's mouth from about six feet away. The drooling can be a bit off-putting, but if it gets bad we just turn their chairs around."

Holly Turnbull, 34, said: "I would never just leave my children in front of the television all day.

"After five minutes the little bastards are either fighting over the controls or playing Manhunt and battering each other with plastic swords.

"Now I crush two tabs of diazepam into their Petit Filous and they just sit there like a couple of turnips. Result." 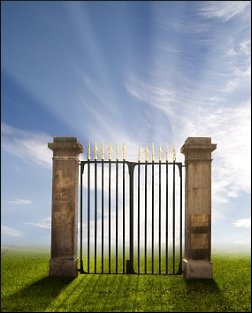 DEAD acting legend Charlton Heston has launched a campaign for the right to shoot angels with a variety of high powered assault weapons.

The 84 year-old, who played Moses, Ben Hur and himself in an episode of Friends, said his heavenly gun rack would be used primarily to shoot the souls of dead animals, including dead deer, dead rabbits and dead pigeons.

But he insisted he and other dead people had a right to protect themselves with a machine gun if an angel broke into their cloud.

Heaven is a relatively crime-free area with gun ownership restricted to licensed hunters and a handful of the bigger saints.

Heston said last night: "I thought heaven was supposed to be a free country. Instead I find it in the grip of hippy communists, pansies and sissy-boy abortion doctors.

"What are these people afraid of? If you've done nothing wrong then the chances of me shooting you are reduced significantly."

He added: "As someone who played Moses in a film, I think I'm more qualified than most to speak on behalf of God.

"The Almighty loves nothing more than spending a weekend in the woods, talking about the Constitution and polishing his favourite Uzi 9mm."

Heston arrived in heaven shortly after a gun had been prised from his cold, dead hands, as predicted.