THE introduction of Plan B restrictions has left a woman terrified that little arrows could return to the floors of shops and supermarkets.

With face masks now compulsory in most indoor venues, anxious shopper Emma Bradford is concerned that the tyranny of one-way systems in supermarkets could be the next imposition to make a comeback.

Bradford said: “We’ve taken the first step down the slippery slope to Hell. Mark my words, the floors of Asda and Sainsbury’s will become a draconian police state by 2022.

“You’ll innocently pop in for some milk and bread, only to remember that you should have picked up some sugar once you’ve gone past it. Instead of just turning back you’ll have to exit the premises and start again from scratch.

“If you try to bend the rules you’ll be subject to the full force of the ‘camp guards’, by which I mean a shop assistant looking at you in a disapproving but bored way.

“I don’t object to the principle of arrows in shops, it’s the fact that they’re mandatory which sticks in my craw. Although even if they were only advisory I probably wouldn’t obey them while chanting ‘do not comply’ into a megaphone. I’m kind of a contrarian twat like that.”

Shop assistant Martin Bishop said: “I don’t know what she’s fretting about. Even at the height of lockdown people only paid attention to one-way systems for a week. I think that’s how Delta came about.”

Sex and The City sequel with just Samantha way better 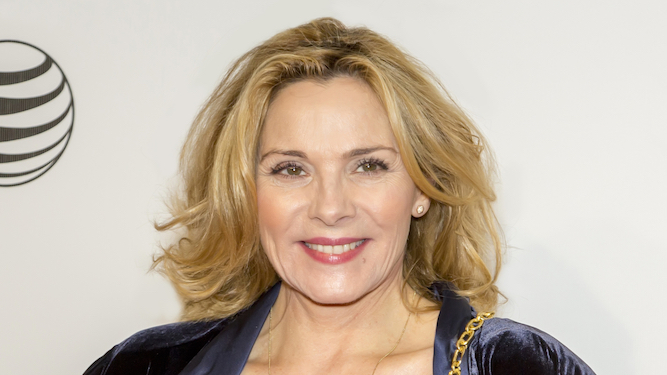 A SEX and The City sequel with only Kim Cattrall begins on a rival channel tonight and is shitloads better than the other one.

Sexagenarian follows the only fun one out of the four as she leaves all that up-itself Manhattan bullshit behind along with her dull former friends, moves to London and shags wildly around on drugs just like the locals do.

Viewer Carolyn Ryan said: “Wow. Those other three really held the show back.

“Now Samantha’s centre stage it’s just one big quipping f**kathon without any dull banging on about shoes or lying face-down on a bed typing on a MacBook. It’s raw, explicit and far funnier.

“While they’re all arsing around learning about wokeness Samantha’s dating her way through a multi-racial non-binary pansexual scene and loving it. And they all love her because she was always basically a drag queen anyway.

“Apparently some depressing shit’s happening in the other one. Sounds unwatchable. In this one, Samantha’s cheating on her main six-way polycule with a different six-way polycule and hoping neither one finds out.

“Did the other show think ‘the City’ was the important bit? Not the ‘Sex’?”