Researchers put two dozen hungry men and women in a room with a plate of chocolate eclairs, separating them from the cakes with screens made of specially toughened glass.

While all the men were happy to wait until the screen was removed, the women immediately threw themselves violently against the glass until it began to crack.

Within 20 minutes half the women had bashed themselves unconscious while the other half suffered severe lacerations to their forearms but did secure the eclairs.

"But in the females, all the measurable activity in the brains we were still able to scan appeared to be linked to the desire for cake."

He added: "These women were not dashing themselves against the glass in a conscious effort to get cake, they simply had no choice."

Brubaker admitted the experiment had not uncovered the complex mechanisms which control how much cake women can eat, but it did confirm that the word 'cake' is written through their brains like a stick of rock.

He said: "If you're ever in a café and you accidentally move between a woman and a profiterole you should drop to the floor, curl up in a tight ball and lie perfectly still.

"It won't save you, but at least there might be some bits left to put in a coffin." 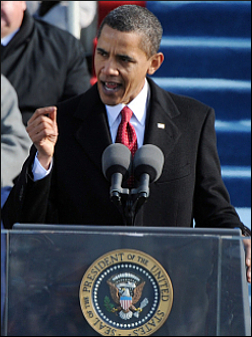 BARACK Obama began his historic presidency yesterday with an historic call for hope, renewal, blah blah, hard work, all that sort of stuff.

Across the great American continent ordinary citizens, humbled by history, stopped shooting each other for five minutes to listen to their new president talk about hope and challenges, before deciding to leave most of the actual challenges to someone else.

Following an historically emotional and badly fucked-up swearing-in ceremony on the steps of the Capitol, President Obama told the vast crowd: "Hope. Renewal. Challenges. America. All those other countries too. And, by the way, who'd have thought it?"

Bill McKay, a veteran of the civil rights movement and a close adviser to the late Robert Kennedy, said: "Let it be written that on this day, at this hour, this great nation was placed in the care of a ruthless, Chicago machine politician who also happens to be half-Kenyan."

The two million people gathered in the National Mall then followed Obama up Pennsylvania Avenue and crowded around the White House to watch him start work.

Grown men cried as he picked up a pen for the first time as president and started doodling during a national security briefing. Some said the doodle was an intense, graphic interpretation of the concept of hope, while others said it was simply a weird looking cat in a space helmet.

With his every movement relayed via CNN and big screen televisions, a thundering wave of emotion broke over the crowd as Obama used the presidential intercom to request some coffee, another pen and a selection of cream-filled pastries.

Alvin Booker, a retired postman from Baltimore, said: "If you had told me 40 years ago that a black man would be sitting in the Oval Office eating cake and using pens, I would have run away screaming because you were obviously from the future and by interacting with you I could cease to exist."

Obama last night faced an immediate challenge as a New York Times poll revealed that more than 75% of Americans were too chubby to applaud his inauguration speech.

Meanwhile in an historically moving display of national unity the country's powerful evangelical movement has promised to wait until mid-February before describing the new commander-in-chief as the 'Chocolate-Covered Satan'.