China Vows To Destroy The Moon

CHINA last night vowed to destroy the moon after a solar eclipse reduced its industrial productivity by almost one percent.

The Chinese government said it was forced to act after the six minute eclipse caused a brief pause in production at thousands of cheap toy farms as workers turned their heads skywards instead of attaching bits of plastic to other bits of plastic.

Wan Gang, the minister for science and technology, said: "Forty years after western imperialists attempted to colonise the lunar surface, we are reminded, once again, of its capacity to threaten our glorious, joyful march towards the peaceful domination of all living things."

China will deploy its 200 million quarry workers to dismantle the moon over the next nine months and use the material to build a series of enormous, terrifying skyscrapers and a 3000-mile bridge from Shanghai to Australia.

But mindful of the moon's essential influence on the Earth's angle of rotation, the Chinese have promised to replace it with a large mechanical version which can be moved around the sky to prevent future eclipses.

The new moon will be staffed permanently by 100,000 Chinese soldiers but will have the capacity to house at least one billion short, hard-working people who eat with sticks.

It will also be fitted with a gigantic laser which, China says, will be used to destroy asteroids and alter weather patterns to promote healthy crop yields.

Mr Wan added: "We promise never to use it to hold the Earth to ransom or otherwise bend it to our dastardly will.

"And in case you're wondering we will make sure there is no great big hole in the top for rebel fighters to drop a bomb into. That would be daft." 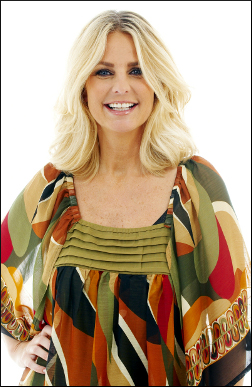 RETIRED weather girl Ulrika Jonsson has been accused of bathing in the blood of virgins in a desperate bid to prevent chicken neck.

Frightened villagers say Jonsson's craving for youth has led to the disappearance of a dozen local peasant girls in the vicinity of her vast, ominous castle in Surrey.

The colourful rustics believe the former TV star, known locally as 'the Countess', is luring the pretty young virgins with the promise of a Magnum Classic and some amusing Celebrity Big Brother anecdotes.

Once inside the girls are given drugged wine, then lulled into a torpor by the hypnotic lute playing of Olaf, Jonsson's manager and personal dwarf.

They are then grotesquely murdered, in a ritual Jonsson believes will restore her looks to how they were before she had four children by five different footballers.

Menacing local landlord Mikhail said: "Tis true. After some light lesbianism, the Countess offers the poor virgin a bath 'to wash that soot off your face'.

"The peasant girl is then led to the jacuzzi, where she is suspended above the tub and her throat cut as the witch writhes naked in their warm blood. It's not very nice."

Handsome local farmer's son Fyodor blames Ulrika for the disappearance of his 18-year-old sweetheart Alina, and has vowed to claim vengeance.

"The witch will pay for the evil she has wrought upon our village. We shall assail the castle with flaming torches and return its ageing denizen to Z-list celebrity hell."

He added: "That said, she was very sexy on Shooting Stars."