A GUARDIAN reader who has worshipped Barack Obama for five years without interruption has finally admitted he is just awful.

Martin Bishop, who until last week was still insisting Obama was a mixture of Martin Luther King and John F Kennedy, has now realised that America’s first black president is basically just that.

Bishop said: “I read in the Guardian this morning that he’s now saying there would be no attack on Syria if Assad gives up his chemical weapons. I just thought – ‘he’s an arse’.

“I’m not in favour of attacking Syria but couldn’t he have said that right at the start? So, yes, I admit it – he is a terrible president.”

Bishop said that even Obama’s achievements were ‘pretty thin’, adding: “The economy is recovering because they are printing shitloads of money. Any moron could do that.

“Well done for getting elected the first time – that was impressive – but the second time he was up against a Mormon. I mean, for fuck’s sake.”

Bishop then listed Guantanamo, Bradley Manning and the NSA as other reasons why he should have realised that Obama was ‘basically a twat’.

He added: “Anyway, I’ve learned my lesson. No more adolescent, liberal hero-worshipping for me.

“That said, I do think George Clooney would make a fantastic president.”

Small testicles are much easier to live with, say men 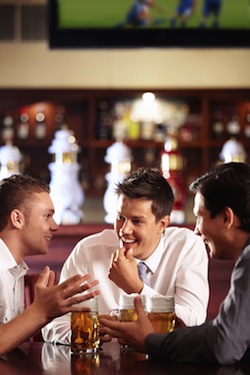 MEN generally prefer to have relatively small testicles, it has been confirmed.

As new research found that men with smaller testicles make better parents, men said that was probably the least important thing about having testicles.

Tom Logan, whose testicles are just under four centimetres long, said: “I’m very comfortable with the overall heft of my scrotum.

“I can walk freely and openly. Rarely do I catch my testicles on bicycle seats, gateposts or an old lady’s face when standing up on the bus.

“Meanwhile, sitting down is, and always has been, an absolute pleasure. I have actually had nightmares about what it would be like to sit on my own testicles.”

Professor Henry Brubaker, of the Institute for Studies, said: “The vast majority of the men we spoke to could not see the point of having large, unwieldy gonads.

“In much the same way that most woman regard massive breasts as a tiresome inconvenience, men see large testicles as a burden – as well as something which could lead to hip and lower back problems in later life.”

The study also found that men were not concerned about the possibility of lower levels of testosterone as most of them found the hormone to be ‘a bit of a bother’.

Meanwhile, more than 80 percent said that if they could they would just keep them in a jar.