Both men lit their first Gauloises at 12pm yesterday and will spend 48 hours chain­smoking under lampposts while wearing hats and trenchcoats.

The French people will study the mens smoking techniques, analysing every tiny movement for traces of loucheness, savoir faire, Gallic resignation and willingness to enter into doomed sexual entanglements with troubled women before they cast their votes.

Right­wing candidate Marine Le Pen ruled herself out of the competition after journalists for Le Monde photographed her parking a car without just smashing it into the one in front.

Hollande has won over the public with his encyclopaedic knowledge of the Asterix books, while Sarkozy is still widely supported for having a beautiful wife who sings unlistenable pop songs in the French tradition.

Both have been praised for their impeccable aloofness, with Hollande actually offered a job as maîtred at a Michelin­-starred Paris restaurant for his supercilious stare and permanent sneer.

But in the climactic smoke­-off Sarkozy has taken the lead for his wrinkle­-eyed gaze into the middle distance, which according to political commentator Antoine De Caunes looks ‘very much the stare of a man contemplating his mistresss suicide which he feels powerless to stop.’

De Caunes said: “Sarkozy is looking impressively insouciant, puffing thick plumes of smoke from his nostrils like a carcinogenic dragon while leafing through a tastefully dog-eared vintage paperback copy of L’Etranger.

“In a masterstroke of Frenchness, he is periodically putting down the book and using the spare hand to cup his wife’s breast as she strums the chords to a Serge Gainbourg song on a battered guitar.

“Hollande, however, has too much resolve in his smoking. France may not be ready for a leader with that level of integrity.” 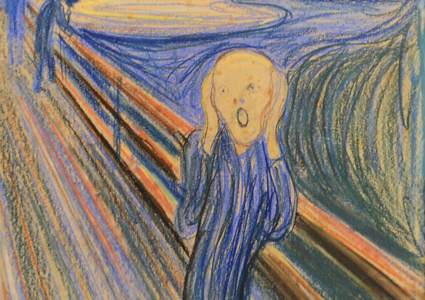