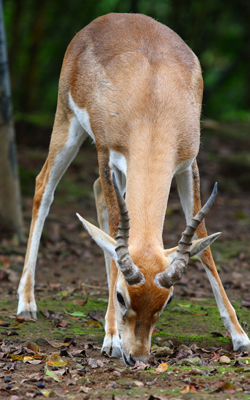 MITT Romney was born in Kenya and raised by beasts, it has emerged.

According to Kenyan tribal elders, the Republican candidate’s parents were on safari in East Africa when their jeep crashed and a pregnant Mrs Romney gave premature birth to a son.

A rogue giraffe immediately stole the child and bore him deep into the savannah.

Raised by a herd of impala, Romney learned the predatory ‘downsize or be downsized’ ways of the animal kingdom which would set him in such good stead when working at Bain Capital.

Eventually, aged 45, Romney was reunited with his family. His ‘wilderness name’ Mitotonga was shortened to Mitt.

Romney scholar Tom Booker said: “After a further 20 years, with intensive therapy, Mr Romney has learned the very basic ability to bond with other human beings by blinking hard, waving stiffly and appearing to agree with whatever they say.”

Donald Trump said: “Mr Romney’s African descent is no obstacle to him becoming president. Indeed, it is a boon.

“During his time as Lord of the Jungle he achieved real change and privatised a number of watering holes.”