How To Avoid Gerry This Summer

THE Foreign and Commonwealth Office is advising British holidaymakers to steer clear of continental Europe this summer, warning that it may be full of Germans.

The Hun has nabbed the deckchairs and booked out the best hotels in Austria and the Sudetenland, and is busy colonising the delightful beaches of Danzig-West Prussia.

Viscount Halifax, the foreign secretary, told the House of Lords: "Fritz has made himself very much at home all over the Rhineland, so I'm afraid you'll have to look elsewhere for a good, meaty sausage and a decent bottle of Gewürztraminer.

He added: "According to our latest communiqués, Poland will soon be awash with Löwenbräu, as Gerry hogs the billiard table, puts his towel on the sun lounger and rounds up the local partisans."

The foreign secretary issued further details of those holiday destinations to be avoided at all costs, including:

PRAGUE: Ghastly Reichsprotektor Heydrich ensconced in presidential palace and playing Brahms at full volume until early hours of the morning.

America Waits For Clinton To F*ck Off 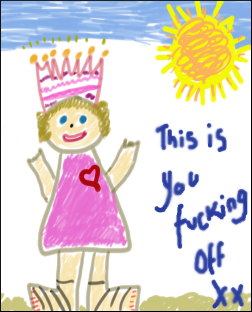 AMERICA was waiting with bated breath last night as Hillary Clinton signalled she may be about to fuck off.

Sources close to the New York senator suggested she is now ready to pick a date to concede the election, and has already pencilled-in April 23rd, 2017.

But senior Democrats are urging the former first lady to just fuck off the minute she wakes up. Nancy Pelosi, Speaker of the House of Representatives, said: "Finally. Jesus.

"I told her to give up about two months ago, then again about three weeks ago. Eventually I had to send her a postcard which just said 'FUCK OFF' in big capital letters."

Pelosi's intervention led to an avalanche of postcards from across the country as thousands of ordinary Americans implored Senator Clinton to fuck off urgently.

Army veterans sent big 'fuck off' flags while schoolchildren made drawings and paintings for the senator telling her how much they would love it if she just fucked off.

And even Hollywood got in on the act with film-makers Steven Spielberg and George Lucas including a 'Fuck off Hillary' message during the closing titles of their latest Indiana Jones adventure.

Meanwhile Democratic nominee Senator Barak Obama is to kick off his general election campaign with a five-day swing through the southern states, already dubbed his 'Please Don't Kill Me' tour.