Iraq Had Shoes All Along, Claims Vindicated Bush

PRESIDENT Bush last night claimed his decision to invade Iraq had been vindicated after US troops uncovered an arsenal of shoes on the outskirts of Fallujah.

More than 400 lethal shoes including sandals, pumps, desert boots and a solitary brogue were revealed as Mr Bush paid a final visit to Iraq to see if there was anything left.

A White House spokesman immediately dismissed claims the US invasion had been based on Saddam Hussein's alleged stockpile of chemical and biological weapons, adding: "No we didn't, we said shoes.

"We did and if you heard weapons of mass destruction, that's your problem. You might want to try using a cotton bud."

The spokesman added: "We believe that many of these shoes would have been built in China with Russian laces, French-made heels and odour-absorbing insoles purchased through back channels via the west African state of Niger."

Prime minister Gordon Brown backed Mr Bush insisting many of Iraq's shoes were slip-ons that could activated in less than 45 minutes.

But France denied supplying Iraq with shoe components insisting its only exports to Saddam's regime had been a 1994 shipment of humanitarian espadrilles.

Meanwhile the Kremlin said most of Iraq's shoes had actually been bought from ex-US defence secretary Donald Rumsfeld when he worked for Hush Puppies in the early 1980s. 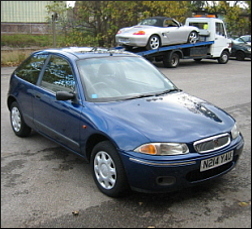 UK consumers last night pledged to buy British, unless there was an obviously superior German alternative.

As the economic war of words between London and Berlin escalated, millions of Britons said they would be happy to boycott German goods as long as it did not involve Volkswagen, Mercedes, Audi, Becks, Lowenbrau, Knorr chicken stock cubes and those chocolate eggs with the toy inside.

Germany, meanwhile, said it would boycott British goods as soon as it could find any.

Dr Tom Logan, an economist at the German-owned University of Reading, said: "If I was a confused recession-hit country looking for advice, I'd probably go with Germany, given that they still have an actual economy based on making stuff that people want to buy.

"Meanwhile, the British 'economy' seems to be based on selling each other money so that we can buy high quality German goods."

German finance minister Peer Steinbruck said: "Let's think, what could we boycott? Cars? Oh yeah, like everyone else in the world I really wanted a Rover 200. Ah, but what about the Mini, you say? Or the 'BMW Mini', to give it its full Bavarian title."

He added: "Beer? Yeah, we drink loads of British beer, it's sooo good. So I guess that means we'll just have to boycott Tizer and Jaffa Cakes."

Chancellor Alistair Darling said: "I will be boycotting a wide range of German goods and services apart from Aldi, obviously. It's so much cheaper. How do they manage it? Those Germans really do know what they're doing.

"And also those big hotdog sausages that come in a jar. Bloody love those."