Nothing To Fear From German Economic Collapse, Say Experts

THE world has nothing to fear from the collapse of the German economy, experts insisted last night.

As the Polish and Czech currencies plummeted and prime minister Gordon Brown flew to Munich, Henry Brubaker, of the Institute for Studies, said Germans were excellent at dealing with economic disruption and were very unlikely to follow a far right demagogue into a hugely destructive global war.

Any difficulties the country did face would be dealt with by the mass production of a small family car, the construction of a motorway network and a vast and terrifying programme of re-armament.

Brubaker said: "We've been here before, and if history is our guide, the German people will all pull together, whatever creed or colour, to get out of this mess.

"Then again, and this is purely a precaution, if you do live in Strasbourg you'll probably want to tape up your windows and get some sandbags in.

"And I'd also suggest that Gypsies get a haircut, a nice shirt and a tie and do their best to develop a Bavarian accent."

He added: "For some reason, which none of us can fathom, some joker keeps on taking all the batteries out the smoke alarms in the Reichstag."

Meanwhile French president Nicolas Sarkozy has suggested Nice or Biarritz as the capital of unoccupied France, insisting Vichy does not have a decent fish restaurant. 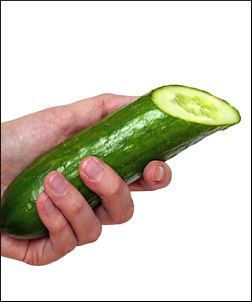 FIVE people were killed by a bent cucumber last night just hours after the European Union scrapped its controversial regulations on twisted fruit.

Police believe four of the victims stabbed themselves while trying to slice the cucumber, while one man may have died after a failed attempt to sit on it.

A police spokesman said: "We found four bodies next to the chopping board while the fifth victim was in the living room without his trousers and an expression that seemed to be a mixture of playful curiosity and impending doom.

"This cucumber was clearly so bent that no-one was sure how to even begin cutting it.

"They would have been coming at it from all angles and one by one each of them has managed to stab themselves in the stomach, the eye or in one case, the lower back."

The spokesman added: "The last victim seemed to be engaged in something beyond freakiness and I suspect we're all better off without him."

"My local Waitrose is now selling a butternut squash that is so deformed it may as well be a box of grenades."