Obama attacked for not calling Republicans a bunch of dicks

PRESIDENT Obama was condemned last night for not describing his Republican opponents as total dicks.

In his State of the Union address, the president drew clear dividing lines ahead of this year’s election, but then baffled many observers by not calling his right-wing rivals ‘corrupt, twisted motherfuckers who should be bulldozed into the sea’.

Veteran US political commentator, Todd Logan, said: “There was a lot of interesting stuff about tax and fairness, but very little about how the Republican Party is just a big piece of shit, filled with bastards and nutjobs.

“It seems he still wants to be seen, essentially, as a figure who is above the everyday political fray instead of being the first president to include the word ‘cocksuckers’ in a State of Union speech.”

Helen Archer, professor of 20th century politics at Georgetown University, said: “In 2001 George W  Bush could have gone to Congress and called Osama Bin Laden ‘a prick with a turd on it’ and now Obama has passed on what may be his last chance to point to the massed ranks of Tea Party Republicans and say ‘fuck you, your mothers take it up the ass’.

“He may have calculated that his re-election chances are better served by a concerted campaign in the working class heartlands of the midwest and a continued focus on job creation, but my research shows that the contest would effectively be over already if he had just said to Michelle Bachmann, ‘eat my shit, you fucking psycho bitch’.”

Some White House staffers still hope to convince the president to alter his strategy and start calling his opponents ‘dicks’, ‘fuckers’ and ‘deviant gimp-felchers who would rape their own grandmothers if she looked at them the wrong way’.

One senior Democrat said: “What is not to be gained from calling Newt Gingrich a dark-hearted scum blister, Ron Paul an insane, racist pig-fucker and Mitt Romney the deformed spawn of a religion founded by a raging psychopath that gives women the same legal status as cars?

“Then he could go on Fox News, speak directly to the voters and tell them that he would gleefully set fire to their bible-filled houses. 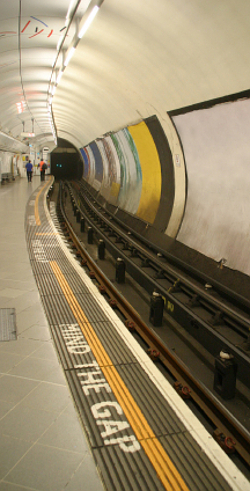 TUBE travellers will be able to broadcast their ignorance even when 150 foot underground by summer, promise TFL.

Visitors to the Olympics, unwashed trustafarians posing as beggars needing a few coins for a hostel bed that does not exist and seethingly homicidal commuters will all be able to access Twitter to complain about being sat in a tunnel for the last half hour via wifi.

TFL chief Roy Hobbs said: “Imagine a wardrobe-sized internet cafe being kicked down a metal hill by an overpaid ingrate that goes on strike every other week.

“We’re bringing the unbearable misery of public transport into the 21st Century by making sure that the very second a thought about toast pops into the echo chamber of a passenger’s skull it can immediately be broadcast to a global audience of poltroons.”

Employers have welcomed the introduction of wifi to the tube after years of not being able to pester their suicidal workers for the 20-odd minutes they are underground.

Experts estimate that productivity should leap by 0.002% presuming this does not prove to be the final step that causes everyone to leap in front of their train rather than get onto it.

Hobbs said: “My epitaph will read that I was the man that ensured Londoners were able to download a photo of a dog and a cat getting married.”