The Mash guide to Romania and Bulgaria

THEY will soon be flooding over here for botched operations, meagre benefits and racist taunting.

But how much do we really know about the Romanians and the Bulgish?

Romanian immigrant Dracula, who sneaked into the country via lax border controls on Whitby shipwrecks, came to violate our women and undercut hard-working local plumbers.

Great Uncle Bulgaria, ambassador to Britain since the late 1970s, ran a gang of scavenging lowlives illegally occupying public land. He was arrested by Operation Yew Tree earlier this year.

Britain fought for years to release both countries from the iron grip of Communism. But experts stress that being freed from Communism does not mean freedom of movement and access to free markets.

Like all Europeans, Eastern Europeans have a history of anti-Semitism. This means it is perfectly okay to spread lies about them.

Thousands of British people have bought cheap holiday apartments in Bulgarian ski resorts. Studies have shown that cleaning these apartments should provide enough employment for everyone in Bulgaria.

Romanians are rumoured to drink heavily, treat women like chattel and engage in bare-knuckle brawls. Experts say that to the average Romanian, most British towns will seem like a fancy tea party. 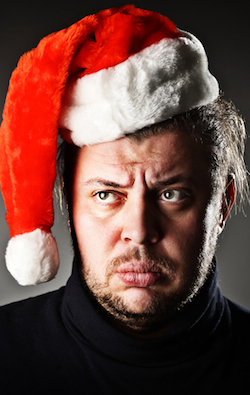 NEW guidelines have been issued to help sexually inappropriate relatives remain within the law this Christmas.

A pamphlet, called Seasonal Touches, will advise those aged under 65 not to fondle a breast or buttock for more than three seconds.

Relatives over 70 will have a touching allowance of up to four seconds, as long as they do so in a bewildered way and suggest they have confused their touchee with a dead spouse.

Mary Fisher, a family counsellor, said: “This system protects the libidinous at a time of the year when they are particularly vulnerable.

“Thanks to media influences, some family members can respond litigiously to semi-innocent patting.

“Many men look forward to standing too close to their sister in law’s bottom during the Boxing Day buffet, and this advice will ensure that it doesn’t cost them their house.”

Denys Finch-Hatton, 56, from Worthing, said: “I dread Christmas, because I have to hug my niece, a local newsreader. All the chaps in the office think she’s a stone cold fox, and I know that if I ever looked her in the eye I would probably fancy her.

“I sweat gratuitously when I sit next to her at dinner, which I’m too sick to eat. If I knew I wouldn’t go to prison for briefly touching her knee, I’d be a calmer man.”

“It’s much worse when Mum invites the old man from next door who spends the day pointing at my chest and shouting ‘dance!’