GOING to a Jubilee street party today? Here’s how to make sure it’s the perfect mix of patriotism and slagging off your neighbours.

8am: Set up and petty competitiveness

The first game of the day will be an unofficial one: who was out earliest, who is working hardest, who will receive the least thanks for the day’s festivities. The best part is that everybody loses.

10am: Quick break to slag off number five’s new extension

Stop for a cup of tea and some intense criticism of number five’s new living space, including the badly done pointing and how rude and boorish the builders were, plus speculation about whether they’ve even got planning permission for it.

Sit down to eat, but not without some raised eyebrows over the shop-bought quiche. And it’s not even M&S. Her Majesty deserves better than Aldi.

Drunk on excitement and trifle, it will all get a bit too much for one 7-year-old, who throws up on some bunting and has to be taken indoors.

Same as above, except instead of excitement and trifle, it will be six pints in the sun and some suggestive remarks about number 42’s new hot tub.

2.15pm: The singing of God Save The Queen

No one knows the words so it’s a mumbled dirge followed by an awkward silence, until slightly alternative Greg from The Lindens puts on the Sex Pistols’ version and starts pogoing on the drive.

2.30pm: Games and merriment (getting pissed)

The kids will hit each other over the head with bits of Giant Jenga while the adults get shitfaced on Pimms and gin. The abuse of number five’s extension becomes so overt that number five leave in a huff.

Everyone returns to their homes after heartily agreeing that this should become a monthly occasion. The instant front doors are shut each house begins their own debrief about just how despicable the neighbours are.

Mum plans entire life around not turning right into traffic 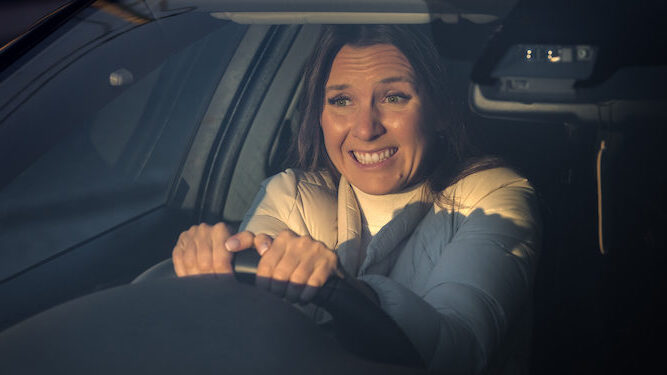 A WOMAN carefully plans every car journey she makes around not having to do any right-hand turns.

Emma Bradford also has a wide range of other non-negotiable driving policies including not going anywhere she might have to parallel park, avoiding the motorway and not driving in the dark.

Bradford’s husband Nathan said: “First it was not driving in heavy rain. Then it was avoiding any towns in rush hour. Now she won’t go anywhere if she can’t evaluate the size of the car park on Google Maps first.

“Basically, if she can only turn left the whole way, never have to reverse, not have to do a hill start and be guaranteed a space with no other vehicles parked within ten metres, she’s totally fine.”

Emma Bradford said: “Not taking right-hand turns does slightly restrict where I can go and who I can be friends with, but if my sister really cared about me, she would move.

“If a car journey does involve a right-hand turn, I’ll happily take two buses instead. It’s a roundabout way but I’ve convinced the kids that an hour’s commute to school is a fun adventure rather than a massive pain in the arse.”