Five items of clothing men shouldn't wear after they turn 30

HAVE your twenties disappeared into life’s rear-view mirror? It’s time to take these clothes to the charity shop, or better yet burn them:

Even if you own a genuinely hilarious T-shirt, which you don’t, it will look tragic when stretched over your bloated, fleshy body. In most cases it isn’t even an ironic T-shirt, it’s simply a shallow fusion of two pop culture images that you have a passing interest in. And you paid £40 for it like a moron.

Only toned hunks who would shame Adonis can get away with wearing Speedos, which rules out most of the male population in their thirties. If you do fall into this chiselled category make sure you upload dozens of obnoxious selfies to your Tinder profile. Apparently this is compulsory behaviour for your sort.

Men over the age of 30 need to be careful with any type of hat, but beanies are especially criminal. They resemble large knitted condoms and wearers look either like a child going out in the snow or a small-time weed dealer who still lives with his parents and wishes his life was like Breaking Bad.

If you were wearing Velcro shoes after primary school you were already pushing your luck, and if you’re shuffling around in them as an adult it explains why you’re still single. Can’t face the prospect of tying laces? Don’t worry. Slip-on Chelsea boots were specially invented for simpletons like you.

Couple on verge of split over whose parents are worse 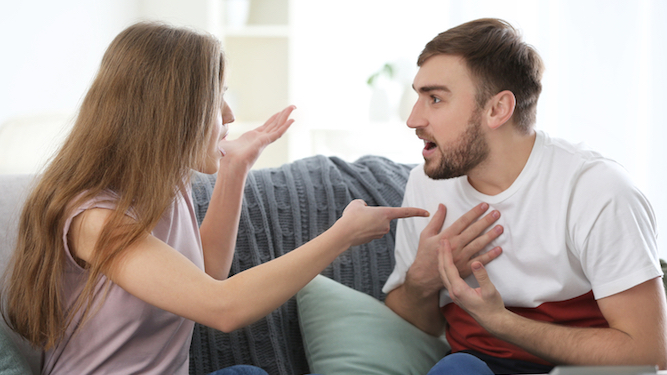 A COUPLE are on the brink of breaking up over a disagreement about who has the most awful parents.

James Bates was thinking of proposing to partner Donna Sheridan before she made an offhand remark about his parents being ‘batshit f**king mental’.

Bates said: “Donna reckons my parents are terrible people because my dad thinks Nigel Farage seems like a top bloke and my mum told everyone in her knitting group when we were having sexual problems.

“Yes, accurate, but I couldn’t take that from someone whose mum puts tomatoes in fish pie and dad bores me about annuities to the point that I want to slit my wrists.

“We had an enormous row where I accused her of being the unstable spawn of a pair of semi-alcoholics and she told me I was a needy, emasculated mummy’s boy.”

However, Bates and Sheridan came to realise how much they do actually like each other’s parents when they started looking at how much deposit they will need to buy a flat.

Sheridan said: “If they’re prepared to chip in fifteen grand and get us on the housing ladder, that would be amazing. And I’ll just have to call James’ mum an overbearing fascist bitch under my breath.”