How you're going to squander your four-day weekend

A WEEKEND bookended by bank holidays is a rare opportunity to unwind from the stresses of life. Here’s how you’re going to completely waste it.

You’re still spun out from the clocks going forwards the other week, so you won’t wake up from your lie-in until around midday. This will somehow make you feel groggier and more lethargic than usual all afternoon, and before you know it you’ve wasted a quarter of your time off just by pottering around the house and groaning.

Having already watched everything that genuinely interests you, you’ll try a few episodes of shows that look vaguely interesting but ultimately do nothing for you. This will take a few hours and afterwards you’ll be left with nagging thoughts that you’re pissing away quality relaxation time, which should be enough to keep you occupied until Sunday.

To make up for lost time you’ll go for a run on Sunday morning and immediately pull a muscle. The blinding agony will leave you sofa-bound for the rest of the day, forcing you to watch more TV shows that you couldn’t care less about. You will still proudly share that you changed into your running gear on social media though.

To kid yourself into thinking that you’re getting the most out of your time off, you’ll finally embark on a doomed DIY project you’ve put off for years. You’ll quickly realise that you’re missing a crucial tool that you can’t get from the shops because they’re shut, leaving you with no choice but to delay it until the next holiday when you’ll make the same mistake.

By Monday afternoon you’ll be so bored that anxious thoughts about work will begin to creep in. Did you sign off on that important email? Is your company about to go under? Is it too late to retrain as someone with actual skills? Resist the urge to check your inbox just in case there’s a message from your boss telling you you’re redundant. 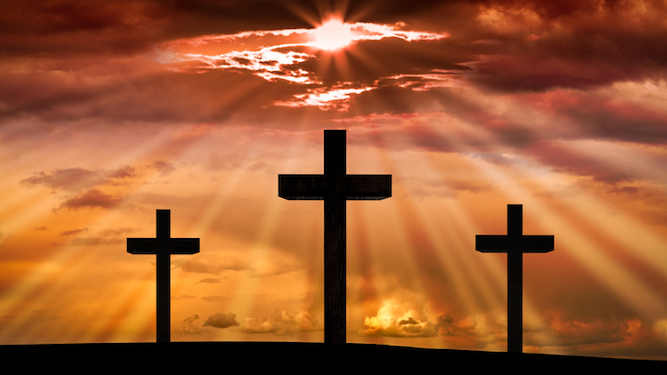 HAVE you been confused about Jesus’s crucifixion ever since you learned about it at school? Here are some issues that really need clarifying.

How does dying for our sins work?

What’s the mechanism behind this? Apparently God designed the universe so that humans can go to Heaven, but only if his son is horrifically murdered. That’s pretty f**ked up in itself, but also note that God himself does not volunteer to be crucified. Cheers, Dad.

What was Jesus’s job, exactly?

What did Jesus do to support himself whilst pissing off the Romans? He could magic up fish and wine, but that probably didn’t happen, and if he could, why not just create money? The Bible is strangely quiet on this subject, possibly because the authors didn’t want to put ‘self-employed handyman’ or ‘beggar’.

Why is it called Good Friday?

Yeah, ‘good’ means ‘holy’, but it’s still stupid. You don’t get much worse days than being flogged, nailed to a cross, then stabbed. And that includes your annual performance review. It’s like calling funerals ‘Happy Burying Nana Day’.

Were the disciples a bit gullible?

Did none of his disciples think ‘Hang on, this Jesus guy might be a nutter’? Saint Peter clearly had his doubts, and denying Christ was actually pretty sensible in the circumstances. Another issue overlooked by the Bible, but then you don’t read it for straightforward, common sense advice.

Jesus could have let himself be crucified for a bit, but really just have been toying with the Romans, then suddenly turn massive like Doctor Manhattan in Watchmen and beat them all to a pulp with the cross. There wouldn’t be many people who dared not to be a Christian after that. Plus it would have been epic.

What was the whole Mary, Joseph and God set-up?

God didn’t actually shag Mary, but even so, was Joseph cool with the whole thing? Did they discuss it? Why is Joseph such a deadbeat dad, never seeming to stay in touch with Jesus? Above all, couldn’t God have got his own girlfriend? He is God after all. He could have made a Scarlett Johansson from a spare rib.