INFLATION got you worried? Bills rocketing? Can’t pay rent? Not me, because I’m a tight bastard. Let me show you how to cut costs to zero:

If you’re in a job that pays the living wage, you need at least two other similarly paid jobs to afford necessities like a pot to piss in. Brilliantly, this also means no time at home to run up bills and no money frittered on nights out. Relentless toil also stops you wasting your time on profitless activities such as sleeping.

Everyone’s terrified about being landed with an extortionate energy bill, but the most cost effective way to stay warm is to wear a big jumper and thermal leggings at all times. It doesn’t cost anything to exercise a bit of common sense, you know. Turn off the water so your pipes don’t freeze.

Live under a bridge

If you’re renting you’re flushing money down the toilet every month. If you own your own place you’re in a housing bubble about to burst. But bridges are free to live under and all you have to put up with is the cold, possible tidal waters, and the thundering cacophony of traffic rolling overhead.

Everything costs money. Even going for a walk demands that you spend upwards of £7 on clothes and shoes. To really look after the pennies you find a vacant corner in a library or branch of CEX and curl up in it for a couple of decades. With any luck you might luck into a long, cost-free afterlife as a ghost.

Chiselling out your own kidneys to afford gas isn’t a sign of Western civilisation in decline. It’s a side hustle, and if you stream that shit on YouTube you’ll earn pennies in ad revenue. Try to save hawking your eyes on the dark web until last or it’ll make chopping off your own limbs more difficult. 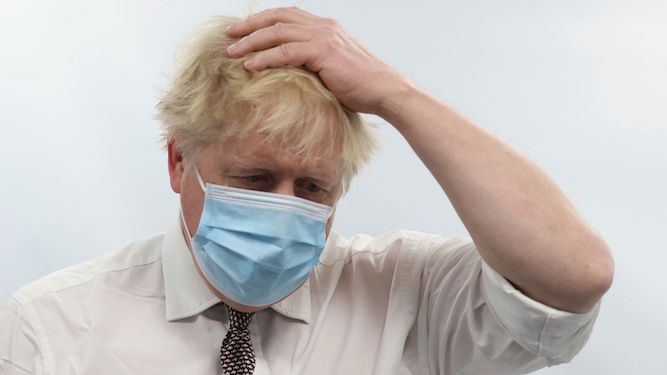 I NEVER thought it would end like this. In my head, after I’d led Britain roaring back to imperial glory, I have to quit because I’ve been caught f**king someone.

That’s how it played out in my head. I’m on the podium, announcing that Ireland is now Britain again to the cheers of millions, and then a nervous little aide’s plucking at my sleeve.

I ignore him, drinking in the adulation of the crowd. But he doesn’t go away. ‘Sir’, he says. ‘Prime minister. Sir, I’m afraid there’s bad news on the internet. And a video.’ The blood drains from my face.

I’m shown to the Whitehall situation room, where red-hot footage of myself in coitus with a young, beautiful woman who is not my wife is playing on a screen the size of a wall. ‘I’ve never even met her!’ I splutter. The Boris on the wall f**ks on.

Who is the woman? That changes. The wife of an oligarch, the daughter of a Cabinet minister, Margot Robbie or simply that Telegraph journalist with the unfeasibly posh name, Sophia Money-Coutts. Either way Big Dog’s been caught with his knob in it again.

After that it progresses quickly. I lie to the House. Another girl comes out. I’m facing a no-confidence vote. A third girl appears with my ninth baby. The government collapses and divorce papers are filed. I resign in disgrace.

But crucially, for the right reason. Not for some stupid party. For what was always fated to bring Boris down: his unquenchable lust. I would go out as the cocksman prime minister I always knew I could be.

So I ask my fellow MPs: hang on. I’ll ride out inflation and the local elections. Once I’m exposed hanging out the back of Lady Kitty Spencer, send your letters in. Once the Johnson’s gone out a hero.