We need a big house because we've got a lifetime of shit, explain grandparents

GRANDPARENTS have explained to their children that they cannot sell up and give them all their money because they own so much crap.

Retirees Helen and Roy Archer say that, rather than being selfish boomers unwilling to make way for a younger generation, they just have a lifetime’s worth of precious belongings that take up a lot of space.

Helen Archer said: “We need this huge five-bedroom house for all of our essentials. For example, what will I do if I have to slice a boiled egg and I haven’t got a drawer in the kitchen containing three separate tools dedicated to that task?

“The spare bedrooms are necessary to store 14 old pairs of curtains that we’ll never use again but won’t get rid of, as well as the combined cassette and record player hi-fi that become obsolete in 1990.

“And that’s without mentioning the large box of napkins taken from restaurants and an astonishing amount of low-quality items bought from pound shops because they’re such great value. Why take what little happiness we have away? People are so cruel to the elderly.”

Roy Archer said: “Actually we’d love to live in a minimalist utopia, but the kids keep hinting about money for a house deposit so we need all this tat to throw them off the scent. It’s worked so far.”

A long-haul flight, and other awful places to be dumped 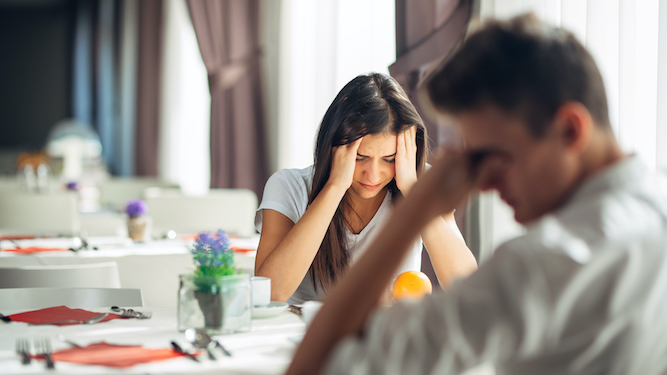 WORRIED your relationship is on the rocks? Here are some awful locations to get dumped in that will really rub salt into the wound.

The average Welcome Break isn’t a particularly cheery place at the best of times, let alone when you’ve been told that your soulmate wants to ‘see other people’. You can’t even have a drink to console yourself, so it’s either eating your own body weight in sweets from WHSmith or losing all your money in the incongruous slot machine area.

On a long-haul flight

If your sweetheart is willing to sit next to you in awkward, occasionally teary silence for nine hours rather than spend another second as your partner, you’ve seriously f**ked it. Hopefully the flight is the return leg of the journey, otherwise you’ll have to spend a week at an all-inclusive resort trying to avoid meeting each other in the queue for lunch.

It’s late, you’re drunk and you’ve spent all night bickering with your partner, which sets up a strip-lit kebab shop full of people messily stuffing doners into their gobs as the perfect arena for a dramatic break-up. Expect the other punters to take sides, offer unhelpful advice, or just ignore your pathetic little scene and throw fries at each other.

The place you first met

If your partner takes you out to the place you had your first date, the last thing you’ll expect is that they’re going to destroy that happy memory by dumping you. But if they’re so emotionally tone-deaf they can’t see a problem with this, you’ve just had a lucky escape from a lifetime of tactless thoughtlessness.

At your wedding reception

Everyone’s worst nightmare is walking down the aisle to find there’s no one there at the end, but even worse would be being chucked just as you cut the cake. You’d be forever known as the poor sod who got ditched at their own wedding, and you wouldn’t even be able to get the money back from the caterers.