What kind of cheerful dickhead are you?

THE world is full of needlessly cheerful dickheads making provably false statements that piss everyone off. But which one are you?

‘A smile’s just a frown upside down’ dickhead

This is superficially true, but so is ‘a person’s just a corpse that hasn’t died yet’ and nobody wants to hear that wisdom. There may only be small physical differences between two facial expressions but there’s a world of pain between them, you optimistic twat.

What, a global pandemic? A new Great Depression? A right-wing dictator-wannabe taking over the world’s most powerful army? Look out of the f**king window, dickhead. The only way this cliche could cheer anyone up is if it was referring to the next series of Love Island.

‘Laugh and the world laughs with you’ dickhead

Anyone who’s ever watched Friends with their granny knows this is a load of cock. Laugh, and the world says ‘What are you laughing for? What did she say? Is she meant to be a prostitute? Well, she looks like one. Your great-granddad went with one in Naples during the war.’

Who dances when there’s nobody watching? Literally the point of dancing is for others to see it. ‘Perform Hamlet soliloquies like there’s nobody listening.’ ‘Paint a picture then burn it.’ ‘Give shitty cheerful advice to people who don’t want it.’ Same thing.

You f**king what? I already didn’t want all these lemons and now I’ve got to set up some kind of beverage manufacturing process? And who gets the lemonade? Let me guess, all the twats who gave me the lemons in the first place. 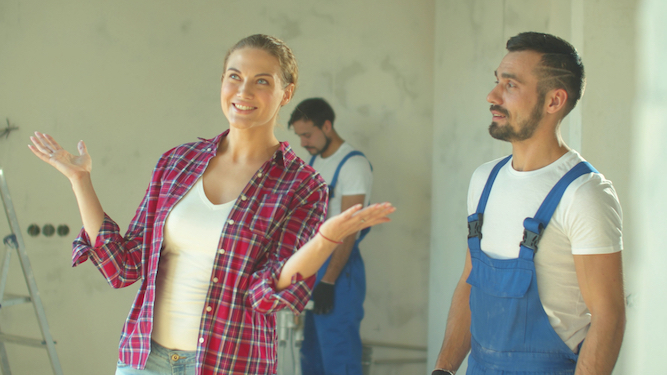 A BUILDER’S intimate understanding of the structural details of a house is making a woman question whether her husband will ever be able to satisfy her again.

Francesca Johnson enlisted the help of a local builder to create an extended kitchen-diner at the back of her home and is now unable to stop thinking about how incredible he has made her house feel.

Johnson said: “From the moment Ryan came over to give us a quote, I knew I was in safe hands. He saw the house for what it was – something that needed some attention, instead of somewhere to stare at his iPhone after work.

“Ryan knows things my husband has no clue about, like where to knock through to transform my downstairs. He knew the right place to put the sink before I’d even thought about it. It’s like he understood without me saying anything.”

She added: “I’m going to have to have the whole house remodelled, just so I can hear Ryan talk pure filth about the importance of not removing load-bearing walls.”