The awards will take place in Trump Tower tonight with no bands playing and a ‘bring your own bottle’ drinks policy.

Trump said: “My decision to ask Mick and Samantha to host the awards is one of the 10 greatest decisions ever made. You can look it up.

“They have always worked so well together, the chemistry is amazing. The whole thing is going to be so professional and classy. So classy.”

A insider from the show added: “We’ve made the awards themselves very small so they don’t make anyone’s hands look small.”

PFI ripping you off exactly as intended, say experts 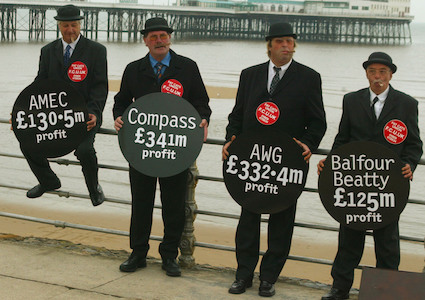 THE Private Finance Initiative is ripping you off in precisely the way it was designed to, experts have confirmed.

Researchers found that paying private companies billions of pounds to build and run infrastructure was at least 40 percent more expensive than the public alternative because that is exactly what was supposed to happen from day one.

Professor Henry Brubaker, of the Institute for Studies, said: “PFI was introduced to transfer vast sums of public money from the Treasury to corporate shareholders. You don’t have to be a Marxist to realise that the legislation made that very clear indeed.

“That’s why, when PFI was introduced, a lot of people who weren’t Marxists said things like, ‘Christ on a bike’ or ‘what in the name of absolute fuck is going on here?’ or ‘stop stealing my fucking money, you dreadful bastards’.”

“To which a lot people said, ‘stop stealing my fucking money, you dreadful bastards’.

“Anyway, it’s all going according to plan, which, for Britain, is really quite unusual.”