IN a display of maturity and selflessness which would make his mother proud, Prince Harry has volunteered his butler to serve in Iraq.

The young prince, frustrated in his efforts to join the battle against the insurgency, has insisted that McGregor, his faithful retainer, be sent to the most dangerous districts in Basra.

"This demonstrates the Royal Family's determination to support our troops and to play their part in the war against evil," said seasoned Royal observer Norman Steele.

"Harry has grown-up and is starting to find his role. I'm sure he will be celebrating his new maturity at Boujis and Mahiki on the Fulham Road tomorrow night."

McGregor, a 34 year-old Scotsman, has no experience of army life and was brought into royal service after 12 years with P&O. He is now a private in the Rifles, and is expected to be on patrol in Basra by the end of the week.

"McGregor is a fine chap, really good sort, who'll muck in, do his bit and all that," said a Palace spokesman. "He's very lucky really, to be given a chance like this. The Prince could have picked any one of his staff but felt that McGregor possessed just the right level of pluck.

"But he won't forget about him immediately and has promised to send him a small picnic hamper from Fortnum and Masons and a copy of Tatler on the first of every month. That should keep his spirits up."

There will be no let up for the busy young Prince who will now concentrate on devising a really spectacular prank for 'Bongo' De Vere's 21st birthday bash at the end of June. 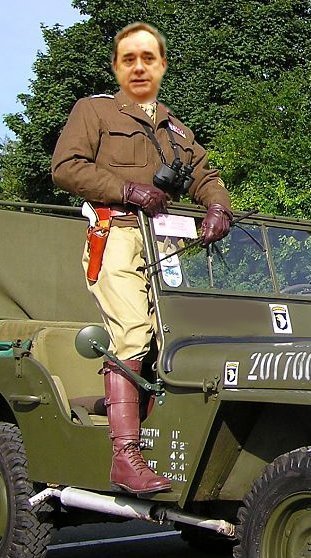 IN his first act as Scotland's new First Minister, Alex Salmond has declared war on the Dutch.

Dressed in full military uniform and carrying a riding crop, Salmond stunned MSPs as he outlined his plans for a full scale invasion of the Netherlands.

He told MSPs: "I have never been opposed to war in principle, only to those wars I disagreed with.

"Holland is much nearer and much flatter than the peace-loving nation of Iraq, and far more deserving of my wrath.

"They sicken me with their bong-ridden cafes, their outstanding beer, their beautiful cities, their total football and their magnificent attitude to weird sex.

"And as Holland is so flat, it will mean massive savings on tank fuel. This will be the most environmentally friendly invasion in the history of warfare and will help Scotland meet its 2020 carbon emissions targets."

Challenged by Labour backbenchers Salmond said: "During the election campaign I stated very clearly that England would be our 'best pal' while Holland would be wiped off the surface of the earth. I'm surprised you don't remember that."

Salmond then called for a "great national effort to subdue these tulip-eating devils".

The First Minister added: "The warlike passion of the Scots has been aroused and if the Dutch think they can hold us back then they better have some absolutely enormous dykes."

Dirk Van Poomf, spokesman for the Dutch consulate in Edinburgh, said: "This took us completely by surprise. We expected him to declare war on somewhere flat but we thought it would be Kent or Sussex."

He added: "It seems your Mr Salmond is nothing more than a power-mad freak, determined to drum-up support for his minority government.