GLASGOW city leaders today unveiled a £40 million package of incentives in their bid to host the 2014 Commonmouth Games – the Olympics of world swearing. William McKay is the Tiger Woods of swearing

The famously abusive Scottish city faces a serious foul-mouthed rival for the prestigious event in the shape of Nigeria's Abuja, the cursing capital of West Africa.

But Glasgow bid supremo Harry Keek said he was sure the city’s package of incentives and outright bribes meant it could confidently tell Abuja to "get to fuck".

Mr Keek said much of the incentive package would be directed into swearing promotion, in particular potty-mouth training for the under-fives in Glasgow and the rest of the developing world.

He said: "The games are all about celebrating the top arseing swearers in the world today, but there is no pissing point unless we invest to bring on the next cocking generation."

The city has designed a new promotional logo featuring a smiling child and the slogan "Fuck Glasgow 2014".

"What in the name of tits are you looking at? Bastarding arsemonkeys. Shit off. Twat!"

Glasgow has submitted a formidable bid and can put forward a strong case with many of the facilities it needs to stage a major swearing event already in place.

With Hampden, Celtic Park and Ibrox, the city already has the world's three most respected swearing venues, all of which frequently stage events attracting 60,000-plus crowds of unbelievably foul-mouthed amateur swearers.

Meanwhile Sauchiehall Street holds the current record for the number of "speccy wee shites" aimed at a single bespectacled man by drunken bystanders over a 1500 metre stroll on a Friday evening.

While Glasgow is confident in its facilities it is also controversially offering a series of freebies to the selection committee as part of its bid to win their backing.

Each will be offered a free bed for the duration of the event in the city centre hostel where McKay honed his skills.

At the same time each will be given two complimentary 'arses', one 'cock' and a 'fanny' to be used against a sullen taxi driver of their choice.

Boala Koje, the Nigerian Minister for Swearing, said Glasgow’s bid was strong but he was sure Abuja would triumph.

He said: "They both really are super efforts, put together by professional teams. It will be a great contest and it is a great shame that, in the end, some fucker has to lose." 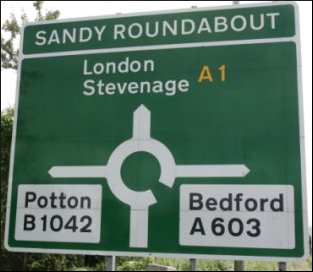 SCIENTISTS at Dundee University have developed the world's first talking road signs as a cheap alternative to satellite navigation systems.

Supported by a £20m grant from Scottish Enterprise, the team of boffins hopes to make audible directions available to the masses. "STEVENAGE IS SECOND ON THE LEFT!!!"


Project leader Dr Henry Brubaker said: "So called sat-navs are very expensive, especially if you work for a university.

"Anyway, we felt that existing road signs did not take full advantage of the available technology, such as loudspeakers.

"People spend more time chatting these days, especially behind the wheel, and so are more likely to miss an important road sign.

"If they can hear it they are less likely to get lost, clock up more miles, use more fuel and contribute to increasing CO2 emissions.

"So you see, talking road signs could actually save the planet. Yes they could. Shut up."

Dr Brubaker said his team were still 'ironing out a few wrinkles' in the system.

"Until we have developed technology so that the driver can hear the signs through his car radio, they will be forced to shout.

"This will mean that busy roads in urban areas will be unbearably noisy, at least for a few years."

He added: "The signs are activated by cars driving past. But if you have two signs in the same area but on opposite sides of the road, they'll end up speaking at the same time.

"This won't really help the drivers and will just sound like two road signs having an argument."

A spokesman for Scottish Enterprise said: "It's an amazing idea that will bring people closer together.

"We sincerely hope that critics of this project will be chased through the streets by an angry mob."