Walking in single file doesn't mean you don't love each other, couples told

COUPLES unable to get out of the way of other pedestrians for fear of their love have been advised that they will be fine.

As social distancing becomes increasingly stressful, couples acting like the pavement is the parade route for their devotion have been asked if they could get a f**king grip.

Lone pedestrian Nikki Hollis said: “We get it, you’re having sex on lockdown. But not holding hands for three seconds is not tantamount to being dumped.

“Normally I’d brush by these tedious twats huffily but now I have to give them a two-metre berth in case they kill me, which invariably means stepping out into the road which could also kill me. For your love.

“Would seeing me splatted by a wanker of a driver speeding because there’s no other traffic make your springtime walk romantic? Or a traumatic relationship-ruining nightmare? Just get out of the f**king way.”

Hollis added: “And don’t even get me started on those bastards that insist on going jogging together.” 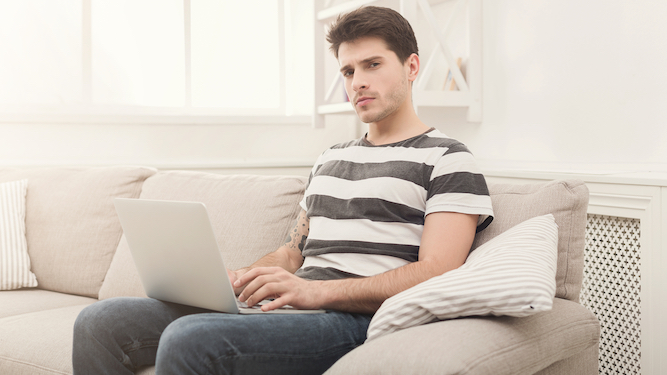 A BORED man has officially read enough about coronavirus to name himself a top epidemiologist, he has confirmed.

Tom Booker now believes himself to be a worldwide authority on the COVID-19 pandemic because he has had little else to do this past month except look at a lot of graphs.

He said: “If you can self-isolate on the basis of a cough, and your judgement is basically considered the same as a doctor’s, then why can’t I self-diagnose as a top virus expert?

“I’ve definitely clocked up 10,000 hours of study of computer animations of how it spreads, most of them on the toilet. If the NHS needs me to take command of the anti-pandemic strategy in Powys and mid-Wales, I’m ready.

“And I’m telling you, the government strategy is all over the place – I sometimes wonder if Chris Whitty has read any Wikipedia at all.

“Why aren’t we looking into the effects of the BCG vaccine, or hydroxycloroquine, or the powerful boost given the immune system by Yakult? Thank God I’ve got social media to get my voice out there.”