THE batteries in a television remote have seemingly been granted eternal life by a force greater than us.

The two AA batteries were bought along with the television five years ago and despite daily use they only require turning slightly every day to keep them amongst the living.

“In fact, they’ll probably use them to power the thing that’s going lower me into the crematorium.

“Obviously, they’ll have to make sure I’m totally dead first but if there’s a chance I’m not they should rub me gently between their hands and that might get an extra couple of days life out of me.”

Norman’s wife, Mary added: “We haven’t got any kids so we’ll probably end up leaving the house to the batteries.”

Barbecue happening even if we all drown, man tells friends 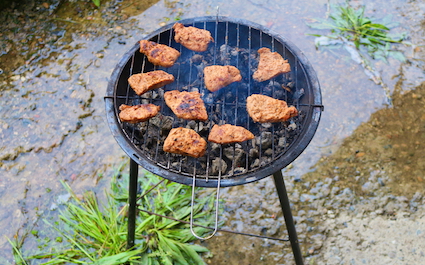 A MAN who is holding a barbecue on Saturday is going ahead with it no matter what, he has confirmed.

Torrential rain and the threat of a category two hurricane in the East Grinstead location prompted suggestions of postponement which were brutally rebuffed.

“Petrol still ignites even if it’s on water so a flash flood doesn’t have to stop proceedings, and these hickory chips are bourbon-soaked. That’s worth getting wet for.

“All I ask is that they stand soaking under inverted umbrellas, occasionally screaming over the relentless drumming of the downpour that it smells delicious and that it might be brightening up.”

Wife Jeanette said: “I’m not saying we should cancel the barbecue, just maybe do it in the kitchen in the oven.

“Or even better still, everyone could do it in their own respective kitchens to save them driving over here. That’d be much more fun.”