ANNOYING bastards are going to be constantly pestering you, thanks to electronic things.

Professor Henry Brubaker of the Institute for Studies said: “Advances in technology are all about connecting people. Specifically, connecting you with people you’d rather avoid.

“If you have a computer there are now 5,695,593 separate means by which people can badger you.

“They could be a colleague hassling you about work, a stranger proffering penis pills or an annoying relative who lives in New Zealand and goes on Skype just to wave frantically and say ‘hiyaaaa’ like an imbecile.

“Of course you could turn your computer off but then within five minutes they’ll all be round your house, having assumed that you’d choked to death.

“Why can’t they invent some software that makes people fuck off?” 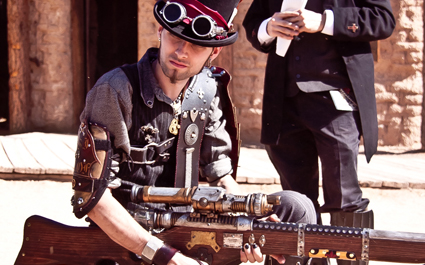 PRETEND Steampunk weapons are less effective than fists, a fight has revealed.

While attending the Whitby Goth Weekend, steampunk lifestyle person Julian Cook received a beating in a pub despite being armed with a laser blunderbuss and a Gatling-gun duelling pistol.”

Cook said: ”Some friends and I were drinking in a pub while dressed as adventurers from a quasi-Victorian alternate reality. In retrospect that was our first mistake, but anyway.

”I was getting some crisps when this hard-looking bloke came over and said ‘Who the fuck are you supposed to be?’

When I explained I was Sir Phileas Phogg, inventor of the coal-powered aerial dreadnought, he replied ’No you’re not, youre a fucking twat.’

“I unholstered my laser blunderbuss, casting a glance over at some nearby girls before coolly replying, ‘Dear Sir, I think ‘Dreadnought’ here might have the last word in this altercation.’

“However I had temporarily forgotten the gun was part of my massive world of pretend and thus completely non-functional.

“The aggressive man then removed my cyber-monocle and stamped on it, before punching me in the face.

“The beating continued for some time, with my friends reluctant to help because they are not really Her Majesty’s League of Fantastical Adventurers but people who work in an office.”

Cook was not seriously hurt in the attack, due to his assailant frequently pausing to laugh at his top hat, welders goggles and fake steam-powered prosthetic arm.